Workers leave a Top Glove factory after their shifts in Klang, Malaysia, on December 7, 2020.

KUALA LUMPUR - A Malaysian glove maker has denied hundreds of its workers are living in metal shipping containers in squalid conditions that the country’s human resources minister described as modern slavery.

A ministry spokeswoman confirmed the reports to Reuters, adding that 781 workers were employed at the factory, most of whom were migrants.

Brightway Holdings Sdn Bhd confirmed the raid had taken place early on Monday at its subsidiary LA Glove, but denied its workers were living in containers and said it had fewer workers than the number given by the spokeswoman.

The reports came as the Southeast Asian nation steps up scrutiny of workers’ accommodation at glove manufacturing firms after a Covid-19 outbreak at Top Glove, the world’s biggest maker of medical gloves.

Top Glove became the site of Malaysia’s biggest virus cluster after more than 5,000 workers were infected, while two other glove manufacturers have also reported outbreaks.

Human Resources Minister S. Saravanan said living conditions at the factory in Kajang were the worst he had ever seen.

“I don’t know how anyone could live like this,” he said in comments broadcast by Astro Awani. “This looks like modern slavery.”

In a separate Facebook post, Saravanan said the conditions at the factory violated Malaysian law on workers’ accommodation standards, and called on companies to provide proper living facilities to their employees.

Brightway Human Resources Manager Alice Michael said the workers were living in a three-storey building close to the factory but outside its boundary, as the company did not want employees to linger around and be exposed to Covid-19.

“There are only 450 workers, many of whom have hostels further away, but were brought into this building temporarily.” 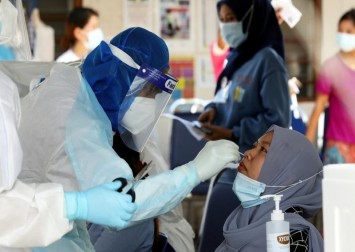 The company said it has been instructed to meet with the human resources ministry next Tuesday but did not elaborate further.

Health authorities have ordered the factory to close for seven days, citing conditions that could cause the spread of infectious diseases.

Brightway said this was due to workers not wearing face masks correctly and social distancing requirements not being followed. It said it would take steps to rectify the situation in order to revoke the closure order.

Malaysia has seen a spike in coronavirus cases since September, with more than 95,000 cases and 438 Covid-19 deaths reported.