KUALA LUMPUR – Malaysian opposition leader Anwar Ibrahim sought backing from the graft-tainted incumbent coalition and his longtime rival to form a government, in a bid to gain an edge over opponent Muhyiddin Yassin, after an election delivered a hung parliament.

The uncertainty over a new government looked set to persist at least for another day as the country's king extended to Tuesday (Nov 22) a deadline for political blocs to forge alliances needed to secure a parliamentary majority.

The inconclusive result to Saturday's election prolongs political instability in the Southeast Asian nation, which has had three prime ministers in as many years, and risks delays to policy decisions needed to galvanise an economic recovery.

Investors reacted negatively to the outcome of Saturday's vote as the ringgit currency and the Kuala Lumpur stock market weakened. Significant election gains by an Islamist party also added to investors' fears, notably over policies toward gambling and alcohol consumption.

Anwar said he met with some leaders from the incumbent Barisan Nasional coalition on Monday to discuss a potential alliance. No decision has been made, but Anwar said he was "very pleased" with the talks.

"I am satisfied as this negotiation was on the need to form a stable government that's inclusive. I am still very optimistic that we will be able to form a government," he told reporters.

Barisan will meet with other political blocs before making a decision, he said.

Anwar's coalition later issued a statement saying it had entered into a "serious negotiations phase" with Barisan Nasional.

The Barisan alliance, led by the United Malays National Organisation (Umno) party – which had long been the dominant force in Malaysia – suffered its worst ever electoral performance, but will play a pivotal role in deciding who forms the government. Its 30 seats in parliament is key for both candidates to cross 112 seats needed to hold a majority. 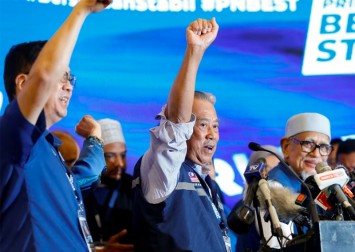 It would be a remarkable turnaround if Umno were to back Anwar, who launched an anti-corruption reform movement when he acrimoniously left the party in the late-1990s. During his time in opposition, Anwar spent a decade in jail on convictions for sodomy and corruption, which he says were politically motivated.

His multi-ethnic coalition opposed the affirmative action programme for ethnic Malays that was championed by Umno.

Umno appeared to be divided on which candidate to support, with one lawmaker saying on Monday that he would never back Anwar even if it meant getting sacked from the party.

Muhyiddin's Perikatan Nasional alliance reiterated that it had majority support, without disclosing where the backing came from, but said it had submitted statutory declarations of 112 lawmakers.

Muhyiddin's bloc includes the PAS Islamist party that has called for sharia law and that secured the largest number of parliamentary seats of any single party.

Although he plays a largely ceremonial role, King Al-Sultan Abdullah could play a decisive role in picking the prime minister, as the has the power to appoint whoever he believes will command a majority.

Anwar's multi-ethnic coalition won the most number of seats in the Saturday election with 82.

Muhyiddin's conservative Malay Muslim alliance took 73 seats, but then secured support from two smaller political blocs on Sunday, giving it control of 101 – still short of the 112 needed for a majority. 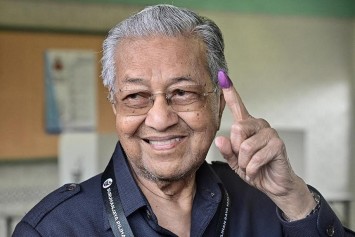 The current situation "bodes well" for Anwar, said Bridget Welsh of the University of Nottingham Malaysia.

The decline of the graft-tainted Umno party, which had led every government since independence from British colonial rule in 1957 up until its first defeat in the 2018 election, has ushered in a new uncertain phase in Malaysia.

But up until recently, the country has a record of being one of the most politically stable in a region that has suffered its share of military coups, violent political upheavals, and insurgencies.