Seen the 'haunted' Amber Court on your way to Genting? Residents say enough with the ghost rumours

Amber Court before it was scrubbed down and repainted.

In Singapore, we have Yishun with its notorious reputation.

But in Malaysia, they have Amber Court in Genting Highlands. And if you've been to Genting, you've probably heard of the long-standing rumours of supernatural activity surrounding this hotel-turned-apartment building.

For example, a documentary in 2021 about this building titled World's Scariest Hotel has raked up an impressive 11 million views on YouTube at the time of writing.

Reddit discussions dating back as far as 2017 refer to Amber Court as "infamous", and even a horror movie called Haunted Hotel (2018) was filmed at the apartment complex.

Its residents however, have had quite enough of the bad press and rumours with more than 100 of them gathering and standing outside the apartment on Saturday (June 18) to protest against YouTubers and "conmen" who claim the building is haunted, reported The Star.

They argued that these allegations have brought down the value of the apartment, with Amber Court Management Corporation chairman Datuk Seri Dr KK Chai adamantly denying such speculations.

He called those rumours "baseless" and claimed that the ones making these videos do it for the clicks or have a "hidden agenda".

"None of us has ever seen a ghost let alone been disturbed by supernatural activity at the apartment," he added, reported The Star.

Chai claimed that some of these YouTubers have broken into the units and shot in the dark and in the middle of the night to create false impressions, reported China Press.

He said breaking into these properties is already an offence. 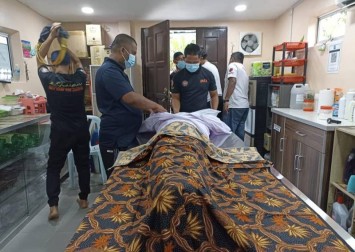 At a press conference in the MCA Public Services and Complaints Department on Wednesday (June 22), Chai also challenged anyone who claims to have experienced supernatural activity in the apartment complex to come forward.

"We can challenge, if anybody have gone through that, please come forward to us. We go and stay together in any of the unit over there in Amber Court [sic]," he said, adding that he can even "invite the media to stay a night" in one of the units.

The committee chairman also said that legal action will be taken against those who spread false information or make up supernatural happenings about that property.

He also said that some residents have made police reports against conmen who claimed that they can cleanse their apartment units of spirits.

The building used to be covered in red algae, its parking lot filled with unused rusty cars.

According to news publication Insider in May, the building has been cleaned and repainted in recent years. Some of the abandoned cars have been removed although parts of the car park are still covered in red algae.

The Star also reported that a total of RM1.4 million (S$441,000) was spent to upgrade the apartment's looks and change the elevators.

TikTok user eunzzx named Cherlyn said she booked a room in Amber Court back in May, but left soon after finding out that the building was "one of the top haunted hotels in Malaysia".

When someone commented about the interior of the rooms at the apartment complex being "nice", Cherlyn responded with a video of the room she booked.

Recent Google reviews of the apartment complex have been a mix of negative and positive comments.

One person even used the review section to crack a joke.

ALSO READ: 7 haunted roads in Singapore to avoid at night during the Hungry Ghost Festival