The cancellation of Singapore-based black metal band Devouror's concert was announced in a Facebook post by its organiser, Goatlordth Records.

KUALA LUMPUR - A concert by Singapore-based black metal band Devouror in Malaysia has been cancelled after the Council of Churches of Malaysia (CCM) raised concerns over the gig that was to take place on Easter Sunday (April 21).

The cancellation of the band's concert was announced by the organiser, Goatlordth Records, in a Facebook post late on Monday, the Malay Mail reported.

Goatlordth Records said it was devastated that Devouror's Kuala Lumpur debut show at the Angkasa Event Space in Cheras, near Kuala Lumpur, had to be called off after almost a year of effort.

"The cancellation of this event is not only a huge setback to us as the organiser in financial terms, but it has also caused many fans of extreme music to be denied their interest," its statement on Facebook said.

"In this democratic country, we are all aware of our freedom to invest interest in almost anything. For some people, extreme music is the preferred channel," it added. 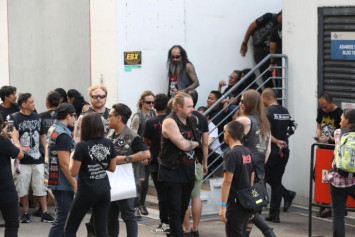 Goatlordth Records did not state the reason for the concert's cancellation, but the CCM had earlier on Monday questioned why the band had been allowed to perform in Malaysia on Easter Sunday, The Star reported.

In a statement, its general secretary, Reverend Hermen Shastri, said the band, which was formed in 2018, had prided itself in carrying lyrical themes that were allegedly anti-Christian and pro-satanic.

He said the band was also expected to perform live on one of the holiest days of the Christian calendar.

"This will be considered an affront to the religious sentiments of Christians in the country," he said. "We hope that the government will look into the matter immediately, as this is not the kind of culture we want to promote among the youth in the country."

In March, a concert by Swedish black metal band Watain in Singapore was cancelled by the Infocomm Media Development Authority following concerns raised by the Ministry of Home Affairs.

The ministry had provided its assessment that the concert should not proceed, citing the band's history of denigrating religions and promoting violence.

The concert had been due to be held at the EBX Live Space, a concert venue in the Upper Paya Lebar industrial estate, on March 7 with a rating of "Restricted 18 (R18)".

Home Affairs and Law Minister K. Shanmugam said public outcry against the show had prompted the ministry to make a security assessment for the show.

An online petition on Change.org that garnered more than 17,000 signatures had earlier called for a ban on concerts by Watain and fellow Swedish metal band Soilwork.