These are five fast-selling new launches that later became unprofitable.

Nothing charges up a condo show flat like a "selling fast" sign, or hyped-up news of how it sold out over a weekend. But as we're about to see, not every condo that had a great launch ended up performing well.

Below are some condos that sold fairly quick (most units gone within six months), but ended up with resale numbers that are a bit lacklustre:

The following is based on new launches from 2012. Only new launches that have registered at least one resale transaction, up to May 2022, are considered.

All of the following properties were able to sell out at least 90 per cent of their total units, within the first six months of their launch (like what we did here).

Then we ranked them by the proportion of gains, considering them to have "done poorly" later on if more than 30 per cent of all buyers made a loss (all type of sales).

You may notice that many of the condos on this list are small or boutique developments.

Note that this can contribute to their underperformance: When your project has only 50 units, for instance, there may only be one or two transactions a year.

In these cases, a single, below-value transaction can send the average plummeting.

Do note that all transactions are based on URA records. There may be transactions that were not recorded by URA that we have no access to.

Percentage of units sold within six months of launch: 97 per cent.

Gambir Ridge was redeveloped from the former Bartley Terrace. 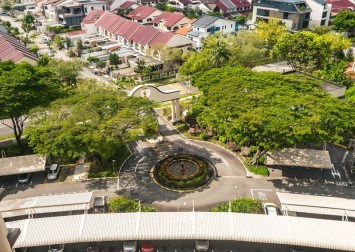 The area saw renewed interest because of the introduction of Bartley MRT station, around three years prior. This solved longstanding accessibility issues: The area now coupled low-density housing (it's a landed enclave), with access to Maris Stella High School as well as the MRT.

On top of that, Nex megamall opened in late 2010. This major retail hub would be just a 10-minute drive.

By the time the land plots were redeveloped, buyers seemed convinced this was the next up-and-coming area.

As the above report mentions, Casa Cambio and Bartley Residences — also nearby new launches — saw brisk sales. Gambir Ridge itself manage to sell out in just three days (it does help that the unit count is small, at just 77 units).

However, interest in the area has cooled significantly. We noted that The Lilium saw slow sales, by the time of its launch.

In recent years, buyers have also seen Bartley Vue and The Gazania as alternatives — these newer developments are only about eight-minutes from Gambir Ridge, so this project faces a lot of recent competition.

Percentage of units sold within six months of launch: 97 per cent.

This development is angled at a pure rental strategy, for landlords with a high-risk appetite. Edenz Suites is perilously close to the red-light Lorongs in Geylang; perhaps close enough to incur financing issues.

Many banks do not provide home loans, or provide only limited loans, for properties too close to these vice areas. Interested buyers will probably contend with high upfront payments.

The brisk initial sales are not surprising — this is a boutique property, with only 34 units to move.

At launch, prices were only around $1,329 psf, with these shoebox units (below 500 sq ft) going for around $650,000 or under. Every unit here is a one bedroom unit, so as you might expect, it also has a very niche audience in the resale market.

Of the resale transactions, just one has been "profitable". But given the gross profit recorded was actually just $9,204, after accounting for selling costs you could just consider this as a loss overall as well. That said to be fair, most of the losses here have been quite minimal as well.

The Geylang area has long been a hotspot for foreign workers, and rental yields can be impressive.

The average gross rental yield for Edenz Suites is 3.6 per cent, with some able to achieve above four per cent — which is pretty good for the Singapore market.

However, small apartments near a red-light area have slim resale prospects. Edenz Suites — and the nearby Edenz Loft — are best left to veteran investors.

Percentage of units sold within six months of launch: 96 per cent.

8 Bassein saw brisk sales at launch, because of its proven location. Novena was, and still is, a hotspot for landlords. There seem to be two main issues afflicting it:

8 Bassein is surrounded by many other boutique freehold condos, and buyers have no shortage of options. Some of these are even closer to the train station.

Novena Suites, for instance, is just a three-minute walk to Novena MRT, whereas 8 Bassein is a much longer 13-minute walk. Even the older Novena Ville is just a seven-minute walk, and is priced much lower on account of age (you can find out more about it here).

We can name quite a few other options as well, including The Ansley and Pavilion 11. Simply put, sellers and landlords have to fight tooth and nail to get attention in the Novena area. 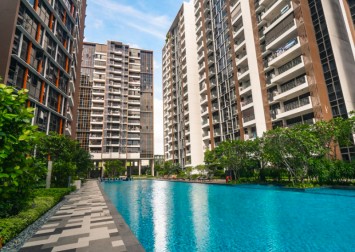 The second issue is the unit mix. Aside from three three-bedroom penthouse units (above 2,000 sq ft), and a couple of three-bedroom units at 872 sq ft, the majority of the units (86 per cent) at 8 Bassein are shoeboxes, at below 500 sq ft.

Shoebox units are generally better for rental gains, but are tougher at resale: We have a detailed explanation of the reasons in this article.

They did try to push the Soho concept (much like The Tennery), but while it seemed like it made sense on paper, the reality didn't seem to impress the general market.

While the small size of the one-bedroom units seems to encapsulate more usability on paper due to the higher 3.4 metre ceiling height with the bedroom forming a study and the bed placed on a platform. But the real-world use wasn't really there.

At that height, it's really not tall enough for you to stand on, and to move up and down daily on such a platform was probably not feasible for most buyers.

A final, but small point. 8 Bassein has 58 mechanical car park lots, which is often seen as a major drawback for car owners.

Percentage of units sold within six months of launch: 96 per cent.

We can't blame buyers if they're disappointed by the performance at Kap — at the time of launch, we would have had much higher expectations too.

King Albert Park was at the heart of this area; we don't think we've ever seen Singaporeans so upset at the closing of a McDonald's for the redevelopment.

When Kap Residences launched, the expectation was a revival of the immediate area — it would be renewed, but still, the amenities hub where students, elderly residents, etc., met and mingled.

Then when Kap Residences was complete, what greeted tenants was… more or less a ghost mall. No McDonald's, no supermarket, no promised anchor tenants. At one point, there was almost a bitter lawsuit over this. It got so bad that residents had to take control of matters themselves.

The good news is, Kap Mall has improved. The mix of shops here is getting better and there's a cinema now.

However, the lacklustre resale figures reflect the rough patch KAP went through. We have to say someone really dropped the ball here: This project squandered a lot of its potential.

That said, there are things looking up in the area too. With the sales of new launches in the area like Mayfair Modern and Mayfair Gardens, to the Linq @ Beauty World — prices may be propped up once more of these units come on the market.

Percentage of units sold within six months of launch: 94 per cent.

Stellar RV, like 8 Bassein, suffered from the decline of the shoebox craze after 2012. Most of the units average 500 sq ft., and top out at around 900 sq ft. 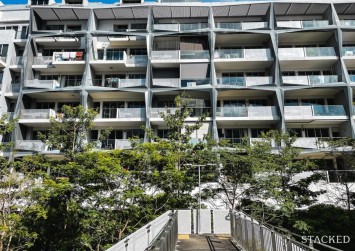 This provides not-so-good resale prospects in the current market: the majority of condo buyers today are HDB upgraders, and these are mainly families; they have no use for a single-bedder.

This leaves few buyers for shoebox units, besides investors (currently hit by higher ABSD rates), or singles (often on a tight budget).

This issue was not apparent at the time of launch, however — we recall that, when Stellar RV first came about, buyers were thrilled with the idea of a River Valley condo at as low as $1.05 million.

We did do a write-up on why it hasn't performed as well in the resale market, and it mainly comes down to: The timing issue, the internal floor plans, and the rental yield (at least, at that point in March 2021).

Take a look at the floor plan and you'd see what we mean.

We don't go too much into detail here, but one of the main issues that we can see is the placement of the AC ledge outside of the living instead of the bedroom.

The half-height wall here would naturally make the space feel smaller as there's less light coming in — there's a reason why this arrangement is rare to see in the market today.

That said, Stellar RV owners might stand to benefit from the uptick in the rental market; and their yields might make up for the lack of resale gains.

Other condos that did well at launch, but underperformed for resale

You may notice that many of the condos on this list are small or boutique developments.

Note that this can contribute to their underperformance: When your project has only 50 units, for instance, there may only be one or two transactions a year.

In these cases, a single, below-value transaction can send the average plummeting.

This is a factor worth considering sometimes, even if smaller developments offer more exclusivity.