Is BHG retail REIT attractive at a share price of $0.61?

BHG Retail REIT is a retail REIT with shopping malls in China.

At that price, the retail REIT is valued at a price-to-book (PB) ratio of 0.7 and a distribution yield of around 6 per cent.

Does the retail REIT provide a buying opportunity for long-term investors?

Let’s find out using my 10-step guide to pick the best Singapore REITs.

As a summary, here are the 10 steps I use to pick the best Singapore REITs:

Those properties are located in Tier 1, Tier 2, and other cities of significant economic potential in China.

BHG Retail REIT has a financial year that ends on 31 December each year.

Let’s now check on how the REIT has performed in terms of its gross revenue and NPI from 2016 to 2019.

We can see that BHG Retail REIT’s gross revenue and NPI have stepped up nicely over the last four years.

Next, let’s find out if DPU has been growing consistently over the years as well.

The decline from 2017 onwards was largely due to an increased number of units that were entitled to distribution as a result of the reduction of distribution waiver (more on that below), as well as the payment of management fees in units instead of cash.

This is to demonstrate its support for BHG Retail REIT and its commitment to the long-term growth and development of the REIT.

The distributions undertaking expires on January 1, 2021.

In its IPO prospectus, BHG Retail REIT warned that there is a possibility for DPU to fall once the distribution waiver is over:

“Following the expiry of the Distributions Undertaking on 1 January 2021, the properties may not be able to generate a level of income for distribution to the unit holders that is commensurate with the levels attained with the support of the Strategic Investor under the Distributions Undertaking due to unforeseen circumstances like material changes in the economic and real estate policies of the areas in which the properties are located and an unexpected supply of competing shopping malls.

This is something that potential investors should take note of.

Check for: Property yield of between 5 per cent and 9 per cent

The figures translate to a property yield of 5.6 per cent, and hence, BHG Retail REIT passes this criterion.

Check for: Gearing ratio below 40 per cent

BHG Retail REIT, at the end of March this year, had an interest cover of just 2.8 times, which is not to my liking.

Even though the occupancy rate is lower than the end of 2019’s figure of almost 97 per cent, occupancy is still at a healthy range. 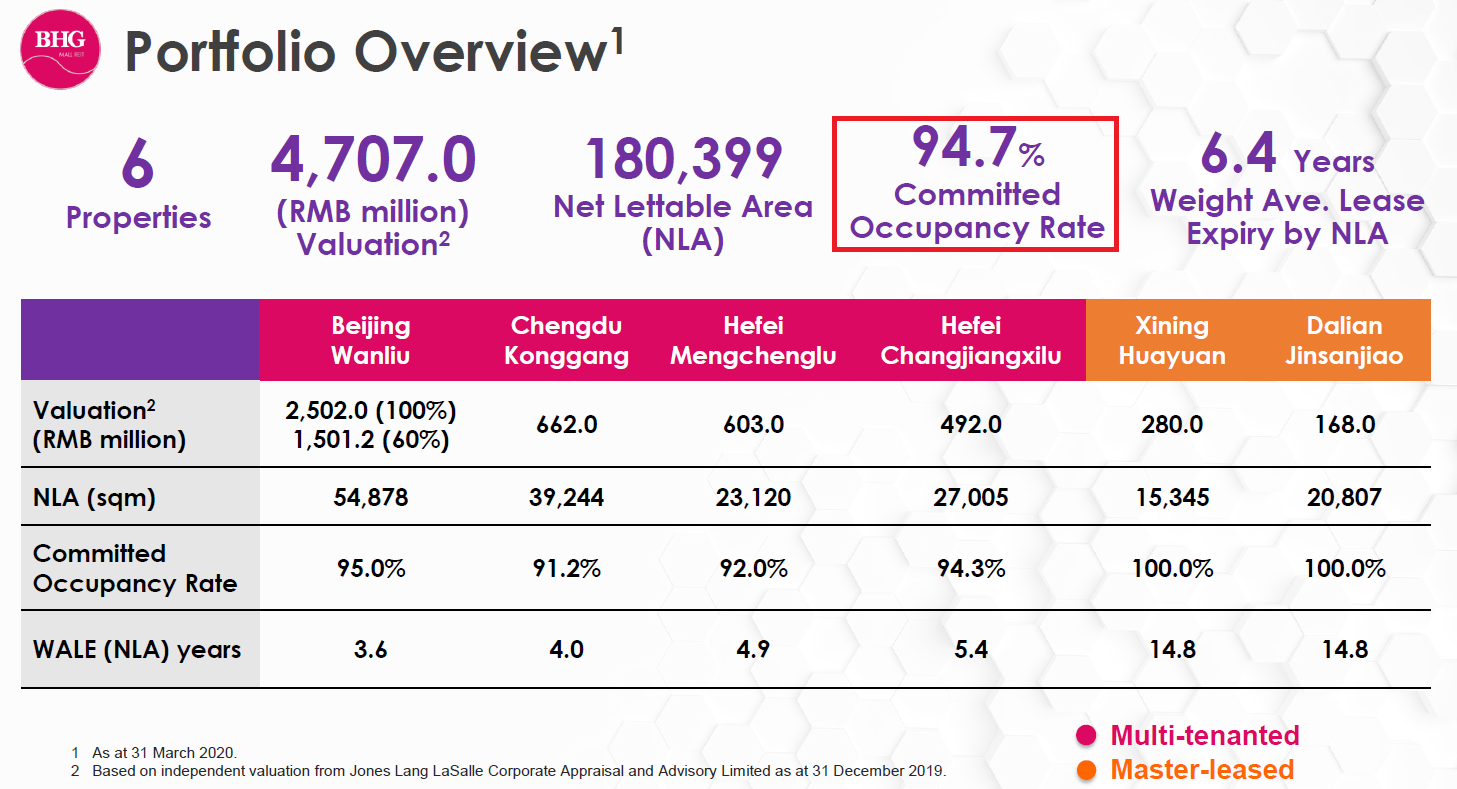 For 2019, BHG Retail REIT’s manager said, without revealing any figures, that all properties had healthy rental reversion for new and renewed leases.

In terms of growth, most of BHG Retail REIT’s leases above a year come with a built-in rental escalation arrangement, giving the REIT organic growth.

On top of growth through organic means, BHG Retail REIT is also able to grow inorganically through acquisitions of 12 properties under its sponsor’s voluntary right of first refusal (ROFR) agreement.

A ROFR arrangement ensures that a REIT’s sponsor offers its properties to the REIT for purchase consideration first before any other company.

The ROFR agreement for BHG Retail REIT is “voluntary” as its sponsor is not required to provide a ROFR to the REIT since it’s not a controlling unitholder of BHG Retail REIT.

Even then, the sponsor has expressed its strong support for the long-term well-being of BHG Retail REIT, according to the IPO prospectus.

Before BHG Retail REIT’s manager acquires properties, it will consider if the property:

2) Has a sustainable operating performance; and

Such stringent criteria shows prudence on the manager’s part. 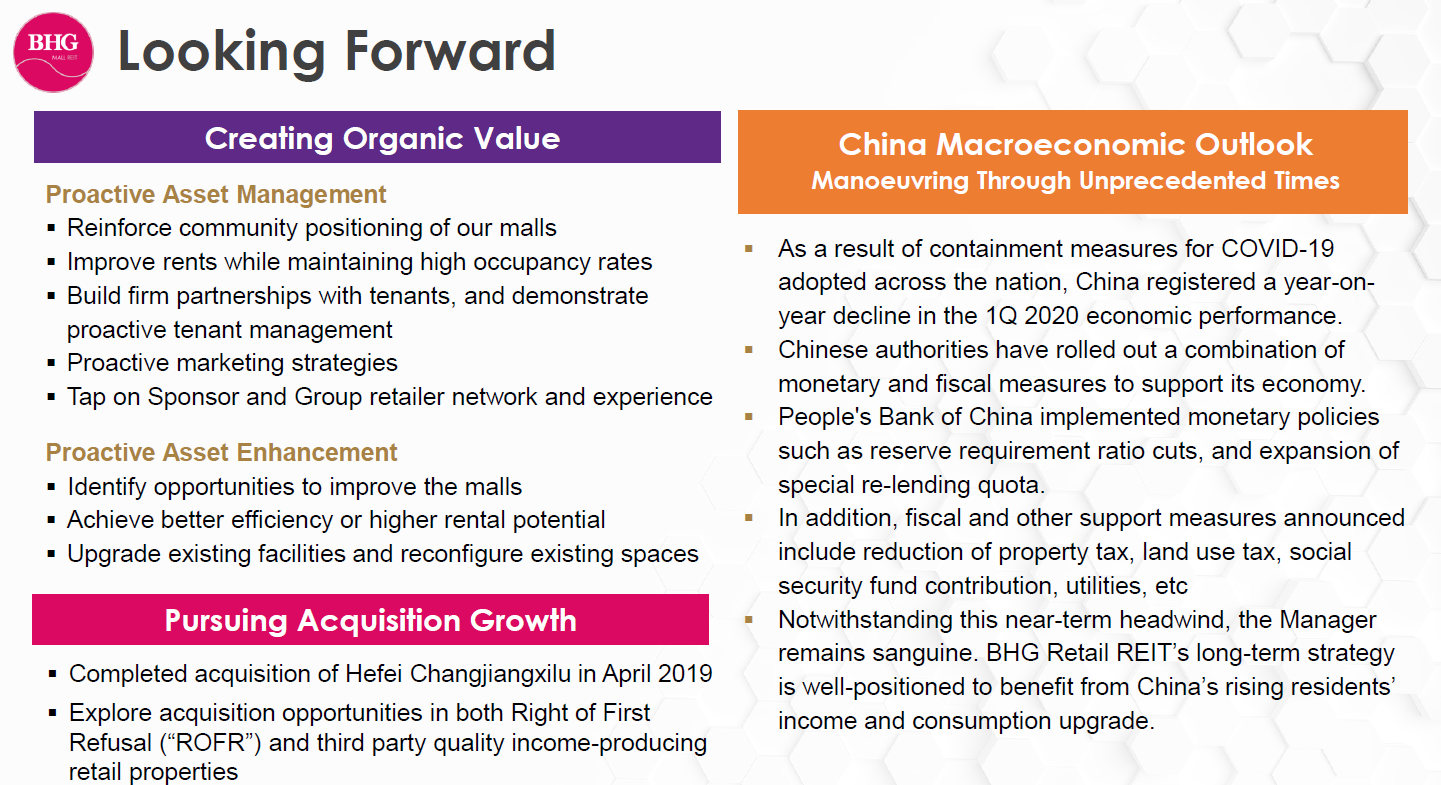 BHG Retail REIT is also optimistic that its “long-term strategy is well-positioned to benefit from China’s rising residents’ income and consumption upgrade”.

Since the latest PB ratio is below 1x, it could mean that BHG Retail REIT is undervalued.

We are unable to compare BHG Retail REIT’s current PB ratio with its historical five-year average since the REIT was listed only in December 2015.

Check for: Distribution yield to be above 5 per cent

At BHG Retail REIT’s unit price of $0.61, it has a trailing distribution yield of 6.3 per cent, which is above 5 per cent.

Although BHG Retail REIT scores highly as a REIT, I’m concerned about its falling DPU.

This is especially so when the distribution undertaking expires on January 1, 2021, as discussed earlier.

Therefore, I’d rather place BHG Retail REIT on my watchlist and monitor it for the next couple of years as I believe it has growth potential.