A detailed list of 13 DBSS projects and their prices today

The Design, Build and Sell Scheme (DBSS) is controversial to this day. Depending on who you ask, DBSS flats were either great, or a wasteful form of housing (in terms of expense). Whatever the opinion, one thing is clear: there are people willing to pay for DBSS flats. Just in February 2021, for example, one DBSS unit in Bishan managed to fetch a price of $1.21 million.

If you’re pondering whether to buy a DBSS flat, or aren’t sure what this is about, here’s what you need to know:

What is a DBSS flat?

The Design, Build and Sell Scheme (DBSS) was active between 2006 to 2011. A DBSS flat is built by private developers, much like a condo unit. However, it is not the same as an Executive Condominium (EC).

DBSS flats do not have full suite condo facilities, such as pools, gyms, etc. as ECs do. It is simply that the unit interiors have a higher quality of finishing, and are more varied than the standardised HDB floor plans. For example, some 5-room DBSS flats consist of four bedrooms as well as the living room (for most HDB flats, a 5-room unit has three bedrooms, a living room, and a study).

In terms of pure size however, DBSS flats are comparable to HDB standards, averaging 103 sqm (1,109 sqft). To our knowledge, Natura Loft and Park Central has some of the largest units among all DBSS developments, with 5-room flats reaching 120 sqm (1,292 sqft).

It is sometimes alleged that DBSS flats have less actual living space. This refers to how they may have the same square footage as an equivalent sized HDB flat, but additional space gets used up for features like a large balcony ( Trivelis is one).

Another key factor is that, unlike ECs, DBSS flats will never be fully privatised. They remain HDB properties until the very end, which means there will always be a Minimum Occupation Period (MOP), eligibility requirements (no selling to foreigners and entities), ethnic quotas, etc.

*Land sales for DBSS development were already suspended in 2011, around a year before the launch of Pasir Ris One; this is why we state the scheme lasted till 2011.

The DBSS controversy: Should it matter to buyers today?

The DBSS flats suffered from two major issues in their day: workmanship and pricing.

Workmanship issues are the most relevant to buyers, even today. Unfortunately, some DBSS developments were afflicted by complaints.

Pasir Ris One received around 500 complaints after key collection, due to multiple such as narrow corridors, and master bedrooms that were too small for king-size beds. Trivelis, in Clementi, saw complaints of shattering shower screens, and shoddy flooring. Centrale 8, which is widely accused of ending DBSS flats due to their pricing, saw residents asking for an extension of warranty.

It’s uncertain why DBSS developments saw so many issues – after all the Executive Condominium (EC) scheme, which goes back to 1999 and is still going – seldom runs into similar problems. 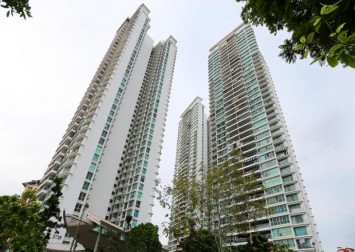 One theory from market watchers is the way DBSS flats were sold: with ECs, developers are tasked with handling the full extent of marketing. This means setting up show flats, getting agents to convince people to buy, being probed by all sorts of questions, etc. The developers’ brand name is also more upfront, with regard to EC development.

DBSS flats, on the other hand, were sold through HDB; so a high volume of sales was all but assured. This could have led to developers being less than fastidious. In fact when buyers were unhappy about their DBSS flats, they often held HDB responsible. Some were shocked to discover that they would have to deal with the private developer , and not HDB, regarding the defects in their new home (although in some cases, town councils and related authorities did step in to mediate).

To be precise, note that DBSS flats are built by private developers, but managed by HDB.

This was bad enough, but the next major contributor was DBSS pricing – there was no control from HDB over the pricing.

By this point, even some market analysts were calling out the pricing issue. It made very little sense that DBSS flats would cost as much as ECs. There were also worries that, once all the DBSS flats reached their MOP, their higher resale prices would impact housing affordability; a prediction that has come to pass, given the number of million-dollar DBSS flats we’ve seen.

Shortly after the Centrale 8 incident, MND withdrew a site in Sengkang that was slated for DBSS development. Soon after, the government announced that the scheme was suspended.

Where are all the DBSS flats today, and how much do they cost?

Prices taken from the whole of 2020

Is it worth buying a DBSS flat today?

There are a few key considerations to bear in mind:

1. Some of the complaints involves issues that can’t be fixed

As we mentioned above, some DBSS developments incurred complaints. Issues involving the unit interior, such as shoddy flooring, rusty dish rags, shattered bathroom screens, etc. are not major problems – these can be fixed, and most resale flat buyers will renovate anyway.

However, certain issues such as the narrow corridors in Pasir Ris One or Trivelis can never be “fixed”. This means that certain issues – such as quickly-flooded common corridors, or leaks from badly designed plumbing – are going to be facts you have to live with as long as you stay there.

We’d be extra careful with inspecting the units in question. Remember that not all developments with issues made it into the wider news. Alternatively, tell us about the unit and we may be able to help.

If you were to buy a resale EC instead of a DBSS unit, there would be no MOP. This means a resale EC could be rented out in whole from the moment of purchase, unlike a DBSS flat. This is definitely a factor to consider, if you have the option of living with parents, etc. while renting out your whole flat.

In addition, a key difference between ECs and the older HUDC estates is that they get privatised at some point. This is important because it removes eligibility restrictions on future buyers (i.e., foreigners and entities).

For many investors, full privatisation is especially important for 99-year leasehold properties: it creates the potential for collective sale to private developers. While an en-bloc is never guaranteed, the chances tend to be higher compared to the government’s Selective En-Bloc Redevelopment Scheme (SERS). At present, only around four to five per cent of HDB estates will qualify for SERS.

Some buyers have also raised the issue of future financing options. Cash-out refinancing , for instance, could eventually be done for a fully-privatised EC (provided the borrower meets the usual eligibility requirements). But this can never be done for a DBSS flat.

3. The “million-dollar flats” may be more about location than DBSS status

Many million-dollar resale flats are DBSS units. However, an argument could be made that this is more related to their location, than their status as DBSS units.

For example, the current record holder is Natura Loft, which has a unit that sold for $1.2 million. But Natura Loft is located along Bishan Street 24, which is just around one kilometre from Bishan MRT station and Junction 8; the hub of a desirable city fringe area.

The next record holder, which was only around $3,000 lower, came from City View. This development is along Boon Keng Road, which is 350 metres, or a four-minute walk, to Boon Keng MRT station. It’s a seven to eight -minute drive from this location to Novena or Orchard.

If you look at the list above, you can see most DBSS developments fall far short of averaging $1 million.

As such, gains are derived more from the location than the flat’s DBSS status; and regular resale flats nearby could have comparable prospects.

4. There is scarcity value to DBSS flats

DBSS flats do stand out in terms of their interior. The inclusion of floor-to-ceiling picture windows, bay windows, large balconies, etc. are features you won’t find in most other HDB flats. Belvia, for instance, has units with three bathrooms – not a feature you’ll find in any other HDB flat. Trivelis for one has keycard entry access for more privacy.

Also, given there were only 13 DBSS developments, these flat types are scarce. That alone can help to differentiate it among the many HDB flats.

Ultimately, we think it’s unlikely that the DBSS scheme will ever be resurrected, given that the current balance between HDB, EC, and private homes is working well for the market.

To be direct, DBSS flats are more for genuine home owners than for investment

DBSS flats are expensive for what they bring; that’s one of the main reasons they were discontinued to begin with.

These units are in a bizarre place investment-wise: they’re much more expensive than regular flats, but without the common facilities of a condo, and lower collective sale prospects toward end-of-lease. This limits the upside potential, with prospective buyers often questioning why they wouldn’t buy, say, a resale EC instead.

As to the better-quality finishing, balconies, different layouts, etc., there’s no precise way to put a dollar value on any of this. Some buyers may consider a balcony or third bathroom worth paying for; others may see it as a waste of living space.

As such, DBSS flats are worth considering from the perspective of a pure owner-occupier. You may have views or unique features that no other flat can deliver; but the higher price point, coupled with existing alternatives like ECs, leave limited room for appreciation.