For one, they're cohabiting — and paying rent — in a comfortable condominium apartment a stone's throw away from Orchard Road.

For another, they're both self-made millionaires. That's right, they're each worth between $2 million and $3 million, Dalton, who just turned 20, tells us.

Admitting that they lead unconventional lives, 19-year-old Joella says both of them have the same fiercely independent streak and grew up with an entrepreneurial mindset.

"You know the people in primary school who go and buy the six-pack of erasers and sell each one individually? We're that kind of people," she laughs.

Indeed, while most people their age are toiling away at their minimum wage part-time gigs, the pair make a comfortable $70,000 to $150,000 monthly from their various businesses and investments.

Dalton runs two start-ups: Glance.sg, a hyperlocal platform for freelancers, and ContainerPay, a payment processing system for the shipping industry.

As for Joella, she operates several stores on e-commerce platform Shopify. She also handles the pair's stocks and cryptocurrency investments.

The grind seems to have paid off for them — when Joella was just 18 and Dalton was 19, they were able to move out of their families’ homes. Not to mention, they have more than enough spare cash to drop on designer clothes and custom PCs.

Here are their top tips for other young people who're getting started in the adulting game.

The pair didn't simply strike it rich one day. Rather, their financial freedom is all thanks to hustling hard since secondary school as well as saving and reinvesting their earnings, they tell us.

Joella got her start in the entrepreneurship game reselling clothes she'd bought on sale at H&M and Cotton On on Carousell, earning thousands in revenue by the time she was in upper secondary school.

Dalton, on the other hand, started programming and developing apps when he was in secondary school, earning about $10,000 for each project.

The first time he ever made money, he spent most of it, he confesses.

"I was like, hell yeah, new iPhone, new MacBook. But after like two or three months of that, I started saving and accumulating and reinvesting most of the money I made."

Even if their businesses aren't doing well, they try to invest at least $30,000 a month, Dalton says, explaining that they think of it as "buying more income".

"We put luxuries — things like designer clothes or fancy dinners — as the last thing that we spend on every month. The first thing would be our essentials like rent, basic food expenses, basic transport expenses, and then our dog's upkeep, followed by investments."

Indulging is okay, but do it responsibly

Blowing cash by living the high life would definitely be a temptation for anyone who makes as much money as they do, but Dalton and Joella say spending responsibly is key.

Dalton says one rule he used to live by was to invest as much as he spends.

"Whenever I buy something from a company, like say I want to buy an iPhone, I invest the same amount into Apple shares. So that way, I'm kind of going to make the money back over time."

Another way both he and Joella limit their spending is to take the price of the item they're eyeing and multiply it by three.

"If that price is painful, it is too expensive for us to buy. If It doesn't feel painful, then this is something we can easily afford. It's okay to buy.

"We also take into account things like if you want to resell the item, especially when it comes to things like some of my bags," says Joella, who has a penchant for Hermes bags.

Some, like the Birkin and the Kelly, can hold their value or "even outperform the stock market", she adds.

Tempted to sink cash into stocks after watching a YouTube video or two? Dalton and Joella both caution against it, emphasising that it is crucial to do your own research.

"You shouldn't invest in stuff you don't understand, including cryptocurrencies. I played around with bitcoin for many, many years before I even bought any, all the way back into secondary school," recalls Dalton.

"So it's not something that I saw in the news, and then I went and bought it."

Joella concurs, warning that trading can be an emotional rollercoaster for those who are just starting out. 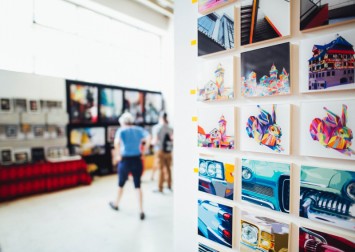 "It's quite bad sometimes, because you can get very affected by the highs and you don't know how bad the lows can be," she says, adding that their portfolio has seen some "very bloody days" in the past couple of months.

In some cases, it's best to remain calm and cut your losses, says Joella.

Besides only investing an amount that you can afford to lose, if you're just starting out and more risk-averse, try putting your money into the Standard and Poor's 500, or an exchange-traded fund.

Even if you can't afford to invest large amounts, consistency is key, Dalton advises.

"You need to remember that you're in this for the long run. Even if you're only investing $100, every month it will compound.

"And by the time you're 30, if you're diligent every month, you'll have made a significant amount of money."

Watch out for our upcoming Leaving Home feature with Dalton and Joella, where they talk all about moving out on their own and dealing with difficult landlords.

Leaving Home is an original AsiaOne series where we speak to young people who have taken the leap to move out of their parents' homes. Who says you have to wait till marriage or the age of 35? They share just what it takes to have a space you can call your own.