A useful observation for Sembcorp Industries shareholders: The troubling state of its energy business

Sembcorp Industries (SGX: U96) dominated the business headlines in Singapore last week. The utilities and marine engineering conglomerate announced on June 8, 2020 that it would be completely spinning off its marine engineering arm - Sembcorp Marine (SGX: S51) - through a complex deal.

As part of the deal, there will be an injection of capital into Sembcorp Marine via a rights issue. Prior to the announcement, Sembcorp Marine was already a listed company in Singapore's stock market, but it had Sembcorp Industries as a majority shareholder.

I won't be explaining the deal in detail because others have already done so. My friend Stanley Lim has created a great video describing the transaction for his investor education website Value Invest Asia.

Meanwhile, another friend of mine, Sudhan P, has written a great piece on the topic for the personal finance online portal Seedly.

On the day after the Sembcorp Marine spin-off was announced, Sembcorp Industries' share price jumped by 36.6 per cent to $2.09.

So clearly, the market's happy that Sembcorp Industries can now be a standalone utilities business (the company has other small arms that are in urban development and other activities, but they are inconsequential in the grand scheme of things). It's no surprise.

Sembcorp Marine's business performances have been dreadful in recent years. The sharp decline in oil prices that occurred in 2014 - something not within Sembcorp Marine's control - has been a big culprit.

Getting rid of Sembcorp Marine will allow Sembcorp Industries' utilities business (the segment is named Energy) to shine on its own. But there's a problem: The economic quality of the Energy segment has deteriorated significantly over time. This is the observation I want to share. Let me explain.

There are two key reasons why I think Sembcorp Industries' Energy segment has gone downhill.

First, over the six-year period from 2013 to 2019, the Energy segment's revenue and power production and water treatment capacities all grew - the power production capacity even increased substantially. But the segment's profit did not manage to grow. In fact, it had declined sharply.

Sembcorp Industries does report a separate profit figure for the Energy segment that excludes exceptional items. But the exceptional items are often gained on sale of assets and/or impairment of asset values.

To me, these exceptional items are not exceptional; they reflect management's day-to-day decision-making in allocating capital.

The table below shows the Energy segment's revenue, profit, power capacity, and water-treatment capacity in each year from 2013 to 2019: 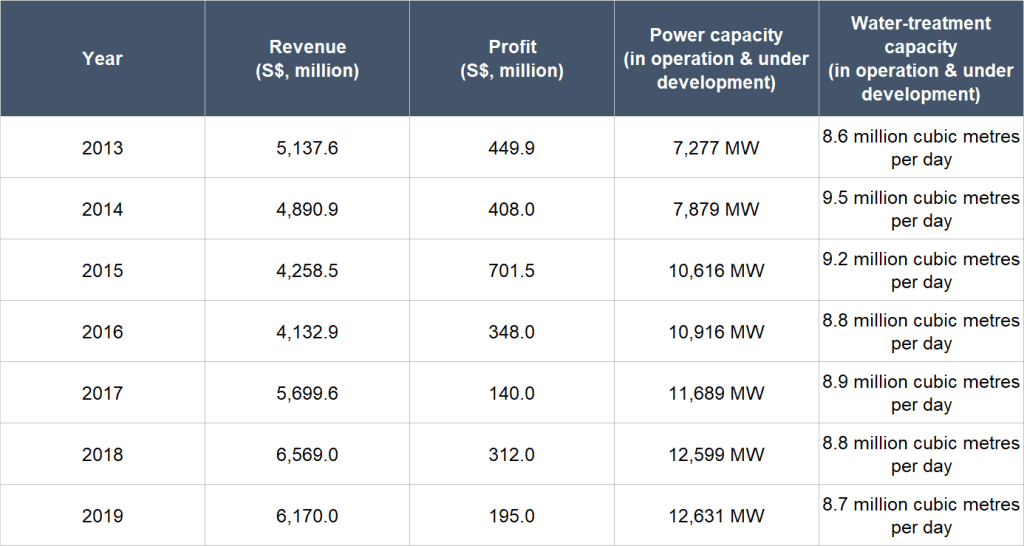 The sharp fall in the Energy segment's return on equity, coupled with the decline in profit, suggests that the economic quality of the segment has worsened materially over the past few years.

It's unclear to me how much of the Energy segment's power and water capacities were actually in operation as of 2013 and 2019.

So it's highly possible that most of the increase in the capacity-figures seen in the period are mostly for projects that are still under development.

If the Energy segment's numbers can't improve in the future, the overall picture for Sembcorp Industries still looks overcast to me even if Sembcorp Marine is no longer involved.