Some of the heroin and cannabis seized by CNB from a residential unit in the vicinity of Braddell Hill on May 11, 2022.

SINGAPORE - A major drug sting by the Central Narcotics Bureau (CNB) has led to the recovery of close to $1 million in drugs from Braddell Hill, and the arrest of 102 individuals including a father and son pair.

About 20.4kg of cannabis was seized from two places in Braddell Hill following the arrest of a 24-year-old Malaysian man.

But a month later, CNB officers recovered a record-setting 24kg of cannabis - the largest haul in 25 years.

The five-day crackdown, which started on Monday (May 9), saw officers seize about 6.227kg of heroin, 724g of crystalline methamphetamine, also known as Ice, 20.438kg of cannabis and 3g of new psychoactive substances (NPS).

The total amount of drugs seized is estimated to be worth nearly $1.195 million and can feed 2,960 heroin abusers, 410 Ice abusers and 2,910 cannabis abusers for a week, said the CNB in a press conference on Friday (May 13). 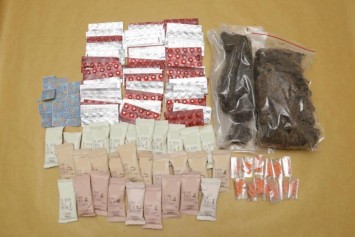 A 17-year-old woman, who is suspected drug abuser, was among those arrested in the sting.

The large cannabis haul followed the arrest of a 57-year-old Singaporean man near Bendeemer Road on Wednesday, said CNB.

A small amount of heroin and $3,200 in cash was recovered from him.

Later that evening, they arrested a 65-year-old Singaporean man in a unit in the same area.

A total of about 821g of heroin and 16 methadone tablets were seized in the unit.

In a follow-up operation, officers arrested the Braddell Hill suspect in a ground floor unit at the development. They recovered 952g of heroin and 4.093kg of cannabis from him.

Some of the drugs were hidden in a duffle bag in plastic bundles.

The drugs seized in this bust have an estimated street value of more than $1.039 million and is sufficient to feed the addictions of about 2,900 cannabis abusers and 2,900 heroin abusers for a week.

In an unlinked case, CNB said its officers had raided a residential unit near Marine Crescent on Tuesday, arresting a 54-year-old Singaporean man for suspected drug trafficking activities.

They seized about 642g of Ice and one Ecstasy tablet along with drug utensils.

Two Singaporean men, aged 25 and 58, were arrested in the same area for drug offences later the same day.

About 8g of Ice and drug paraphernalia were recovered from the 58-year-old man.

The Ice seized in the bust on Tuesday has an estimate street value of $130,000 and is sufficient to feed 370 Ice abusers for a week.

Deputy Director of CNB (Operations), Assistant Commissioner Leon Chan, said: "Singapore's open economy and connectedness as a regional transport hub, and its proximity to major drug-producing regions, places it in constant danger of being overwhelmed by an influx of narcotics.

"While the drug situation in Singapore is relatively under control, we cannot take this for granted."

Offenders found guilty of trafficking more than 15g of pure heroin, 250g of methamphetamine or 500g of cannabis could face the mandatory death penalty.