The integrated transport hub will feature a 27-storey block connected by a sky bridge to another eight-storey block.

SINGAPORE - The contract for the design and building of Jurong East integrated transport hub has finally been awarded, 12 years after it was first mentioned by then Transport Minister Raymond Lim.

The Land Transport Authority (LTA) on Thursday (Feb 4) announced the decision to contract the works to the Singapore branch of China Communications Construction Company for $477.4 million.

Building works should start as early as the second quarter of this year, in time for its previously set completion year of 2027.

Integrated transport hubs are fully-conditioned bus interchanges that are linked to MRT stations and adjoining commercial developments such as shopping malls.

The Jurong East integrated transport hub, in addition to the bus interchange, will feature a 27-storey block connected by a sky bridge to another eight-storey block. The two blocks will house offices, retail spaces and other public facilities.

In announcements made in 2017, the Ministry of Transport and the LTA said a joint office for the two organisations will be located at an integrated complex at the Jurong East MRT station, which is to be completed after 2020.

When asked, LTA would only say that some of its offices will be moved to the hub. These are “part of efforts to optimise land use, decentralise government offices from the city centre and consolidate our office spaces”, it added.

Inclusive facilities have been incorporated into the design. They include barrier-free alighting areas and toilets, priority queue zones with seats and a nursing room.

The inclusions are in line with the authority's aim of making transport nodes more accessible, and not just at the Jurong East integrated transport hub.

Yio Chu Kang bus interchange, for example, has also been undergoing expansion and enhancement since December 2017 to include features like graduated kerb edges to ease boarding by wheelchair users. 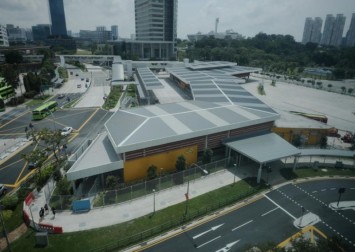 China Communications Construction Company is now building the Boon Lay station on the future Jurong Region Line and will soon start work on the viaduct and tunnels of the Johor Baru-Singapore Rapid Transit System (RTS) Link, which will connect passengers between Johor Baru's Bukit Chagar terminus station and the Singapore terminus in Woodlands North.

The current Jurong East bus interchange was relocated from Dec 6 last year to a site across the road. This is to facilitate the construction of the integrated transport hub and the Jurong Region Line.

There was some confusion among commuters earlier on after the move.

But station assistants directing traffic, and a pedestrian overhead bridge built across Jurong Gateway Road to keep commuters sheltered throughout their transfer, have made things smoother for commuters.