155 Music Lounge (left) and Ma Cuisine are among the F&B outlets ordered to close.

SINGAPORE - A total of 16 food and beverage (F&B) premises have been ordered to close and 1,500 people issued advisories for breaching coronavirus restrictions in the past week, after the authorities increased patrols and checks amid the continued flouting of rules.

Eleven people involved in a Orchard Hotel birthday celebration in February, which led to the hotel being forced to suspend operation for 30 days, have also been fined $300 each.

On Thursday (July 1), the Ministry of Sustainability and the Environment (MSE) urged people and business operators to continue abiding by the rules. Stringent enforcement will be carried out at premises such as parks, beaches, basketball courts and Housing Board estate pavilions in the coming weeks, it warned.

The 16 F&B outlets which have been ordered to close had allowed groups of more than two people from different households to be seated either at the same table or across multiple tables, which led to intermingling.

Some also failed to make sure patrons at different tables were seated at least 1m apart. These include the KFC in East Coast Road, where different groups of customers intermingled and played music, and the Don Don Donki Food Court in Eu Tong Sen Street, where there was no safe distancing between groups on multiple occasions.

They were generally made to close for 10 days, with Beauty Jade Bar in Balestier Road also fined an extra $1,000 for its breaches.

MSE said that in the past week, another 13 F&B outlets had been issued fines. Chicken Up in Tanjong Pagar Road, for example, was fined $2,000 for breaking the rules a second time.

Another 15 people were fined $300 each for gathering in groups of more than two at F&B outlets and for not wearing a mask when not eating or drinking.

But this was a mere fraction of the 1,500 people who were given warnings from June 25 to 27 in parks and beaches managed by the National Parks Board (NParks).

MSE said these people had gathered in groups larger than the permitted group size and were found not wearing masks when not engaging in strenuous exercises on these three days.

Where people are not compliant with safe distancing measures, NParks reserves the right to temporarily close access to parks, sections of beaches, lawns and other facilities such as carparks and shelters. 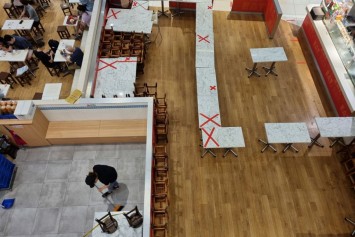 The Orchard Hotel birthday party of 11 people had earlier caused the hotel to be fined $1,000 and be disallowed from taking any new room bookings from June 25 to July 24.

The Singapore Tourism Board will continue to do regular checks and take strict action against breaches by hotels and guests, MSE said.

"Even as we step up the pace of vaccinations in Singapore, we urge everyone to observe all safe management measures and practise good hygiene, especially in high-risk settings such as when dining in at food and beverage establishments, to curb the spread of Covid-19," MSE added.