SINGAPORE - A woman who had failed to wear a mask on numerous occasions at public places, including the Marina Bay Sands (MBS) integrated resort, admitted to her offences in a district court on Monday (Sept 6).

She was sentenced to 16 weeks in jail.

Phoon Chiu Yoke, 54, who appeared via video-link, was first charged last year after she failed to have a mask over her nose and mouth at Newton hawker centre between 7.20pm and 8pm on May 8, during the circuit breaker period of measures against the Covid-19 pandemic.

She left Singapore for Britain soon after and returned to Singapore on June 28 last year.

After that, Phoon loitered around various places in the hotel and was not wearing a mask when she did so. 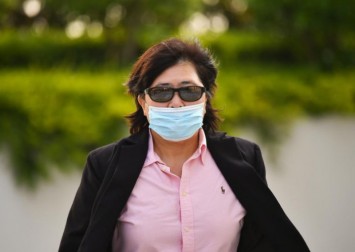 In May this year, she was captured on video, again failing to wear a mask at MBS.

She committed similar offences at other places, including outside the State Courts building, between Dec 2 last year and May 24 this year.

Phoon was out on bail when she failed to wear a mask at the Mandarin Orchard Singapore hotel on June 25.

A month later, she was charged over this incident. Her bail of $12,000 was revoked and she was taken into custody.