2 in 3 here don't have savings to last past 6 months: Survey

More than half the respondents said their savings had taken a hit.

Many Singaporeans do not have enough savings to allow them to maintain their current lifestyle beyond six months if they were to lose their jobs now.

An OCBC Bank survey conducted last month during the circuit breaker period found around two-thirds of working Singaporeans and permanent residents (PRs) indicating that they did not have enough savings to last them beyond six months.

Around half of those surveyed had suffered wage cuts, been placed on no-pay leave or had their commission earnings reduced.

The survey aimed to understand the impact of the coronavirus crisis on the financial well-being of residents, OCBC said yesterday.

More than half the respondents said their savings had taken a hit.

Around 20 per cent indicated that their savings fell by more than 20 per cent, while one in three said the decline was up to 20 per cent.

Another 20 per cent were maintaining their savings level.

But some managed to save more, with 5 per cent of the respondents saying their savings had increased by more than 20 per cent.

The remaining group said that their savings had gone up by up to 20 per cent.

The respondents indicated that their retirement plans had been impacted as well, with the Covid-19 pandemic affecting people across the age groups differently. 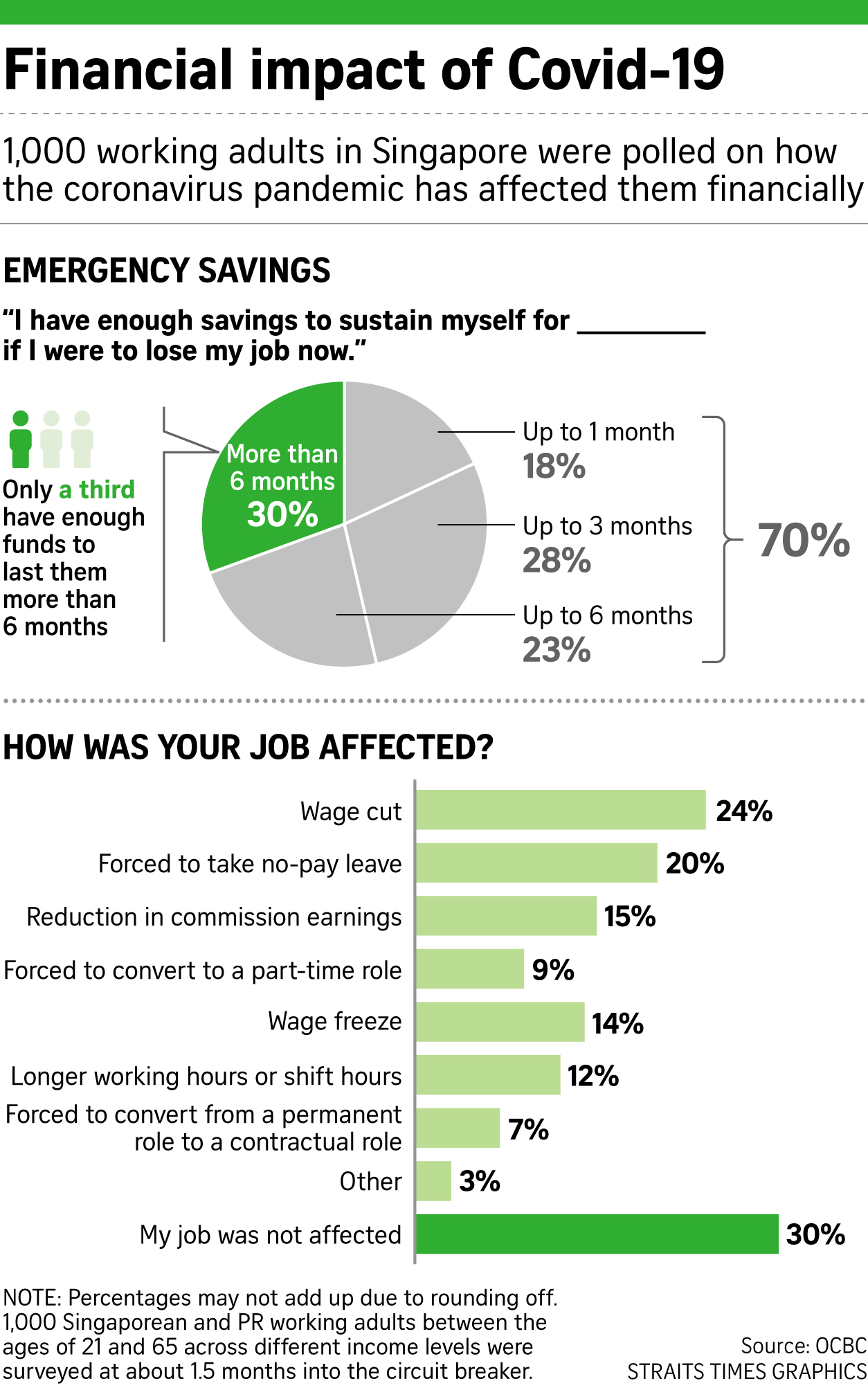 A third of those aged between 40 and 54 said they had cut their retirement savings.

OCBC found that the pandemic had also impacted investment strategies, with two in five saying they were planning to downsize their portfolios. About 16 per cent said they will cut their investments by more than 20 per cent.

The respondents did, however, express hope for the next six months.

OCBC's wealth management head, Ms Tan Siew Lee, said: "It is encouraging that some are doing the right thing to boost their financial health, by continuing to save, spending prudently and making sound investments according to their risk appetite and financial circumstances.

"But we also hope that those who are cutting back on these aspects, which are crucial to building a nest egg for retirement, will not despair.

"The current Covid-19 crisis, like the severe acute respiratory syndrome outbreak and the Asian financial crisis, will pass."