2 Chinese nationals injured in Jurong fire in stable condition; arrangements made for worker who died

SINGAPORE - The two Chinese nationals who were injured in a massive fire in Jalan Buroh on Friday (June 21) are now in stable condition, and one of them was discharged from the hospital on Saturday morning, the Migrant Workers' Centre (MWC) said.

The non-governmental organisation said in a Facebook post on Saturday that the worker who remains in hospital "should get better with treatment and healing time".

MWC also confirmed that another worker, also a Chinese national, had died in the fire at the liquefied petroleum gas (LPG) facility at 43 Jalan Buroh in Jurong. It is occupied by Summit Gas Systems, a subsidiary of Union Energy Corporation.

The Straits Times understands that the worker who died is Mr Wei Xiao Yong, 43.

The fire spread rapidly across the facility which was about the size of two football fields, and raged for over two hours.

Loud explosions were also heard from as far as 4km away.

The Singapore Civil Defence Force (SCDF), which sent around 120 firefighters to the scene, described it as the largest LPG fire it ever had to combat. 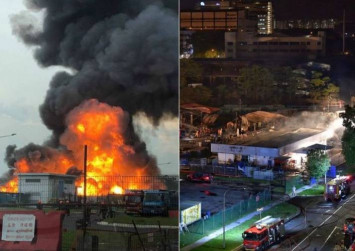 The worker who was discharged on Saturday morning was understood to have suffered superficial injuries.

The other worker was treated for his burns and was believed to have undergone surgery on Saturday.

He is currently in a high dependency ward, a Singapore General Hospital spokesman said on Saturday.

MWC said in its Facebook post that it is working with the company to ensure that the workers are taken care of.

The workers' company will help in underwriting the costs of medical treatment, and filing the necessary reports and claims for compensation on behalf of the workers.

An MWC officer spoke to the injured worker who was discharged on Saturday morning, the centre said.

MWC will also help with funeral arrangements and rites for the deceased worker, as well as assist his next of kin and with the repatriation of the worker's remains.

[Update: Fire @ No. 43 Jalan Buroh] Firefighting into the night.

ST understands that efforts are being made to contact Mr Wei's next of kin in China.

"We would like to reassure concerned Singaporeans and migrant workers that the affected workers are and will continue to be well taken care of, even as investigations into the cause of the fire are ongoing," MWC said.