The police arrested two men driving their cars dangerously on the Central Expressway (CTE) which led to an accident on July 29 night.

The accident involved one of the cars and a van.

Preliminary investigations revealed that the car involved was driving dangerously alongside another car along CTE prior to the accident, the police said in a statement today (July 31).

Footage of two black cars speeding on the expressway went viral on social media hours after the accident happened.

The video showed the silver Toyota van lying on its side in the bushes, while a young woman with injuries to her forehead and feet sat on the road shoulder. 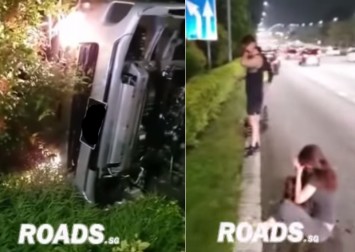 An angry motorist was also seen confronting what appeared to be the driver of the Volkswagen hatchback involved in the accident.

The van driver, 38, and his passenger, a 25-year-old woman, were taken to Khoo Teck Puat Hospital.

On July 30, traffic police arrested the car drivers aged 30 and 41, and impounded both vehicles. Their driving licenses were also suspended with immediate effect.

Additionally, if found guilty of causing hurt to another person while driving dangerously, they will face a jail term of up to 2 years, a fine of up to $10,000, or both.

Subsequent convictions of the offence carry heavier penalties and errant drivers may also have their driving licence disqualified.