Two Singaporean boys were injured after a pickup truck lost control and crashed into four other cars as they were preparing to enter Singapore on Sunday (Nov 10) afternoon.

The victims, aged 11 and 12, were in one of the cars outside Sultan Iskandar Building in Johor Bahru when the accident took place.

Both of them suffered various degrees of injury; the younger boy suffered broken bones in his arms and legs while the older boy's head, arms and legs were injured, reported Sin Chew Daily.

They were taken to the hospital for treatment.

Multiple dashcam videos of the incident posted on social media showed the exact moment of the collisions.

A red Mitsubishi Triton was seen hurtling towards one of the stationary vehicles, hitting the back of the hatchback before crashing into a car in front of it.

In another clip from a car in an adjacent lane, it was seen crashing into one more car, causing it to spin out of control. 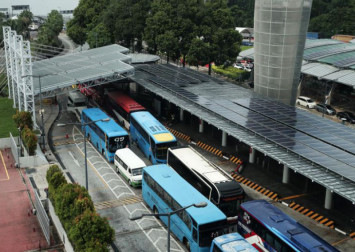 In a statement, the director of the police district in Johor Bahru said the driver of the pickup truck had been heading towards Stulang before the accident.

The exact cause of the accident is currently still under investigation.