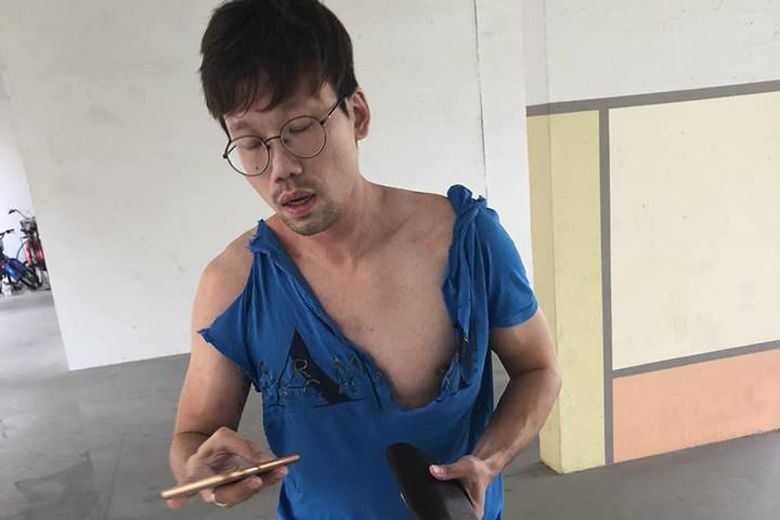 SINGAPORE - A 29-year-old man was arrested on Wednesday (Oct 17) after a woman accused him of attempting to take upskirt videos and photos.

In a statement, the police said that it was alerted to a case of public nuisance at 1.46pm at Block 155 Simei Road.

When she turned around, she found a man bent down with his phone turned over so the camera facing upward. When she questioned him, the man walked away hastily.

After a scuffle, during which Ms Chen said upskirt videos of herself were deleted, the man handed over his identification card and challenged her to make a police report.

Photos accompanying the post show a man with glasses, a badly torn shirt and flip-flops, carrying a plastic bag.

In a video in the same post, the man can be heard denying that he had done anything.

The Straits Times understands that the man in question, Glenn Goh Wei Liang, was sentenced last year for taking upskirt pictures of nearly 50 women over a period of about 10 months.

He was jailed for 18 weeks on Nov 20, 2017, after pleading guilty to 10 counts of insulting a woman's modesty. He had been committing such offences since 2015.

"(I) feel traumatised by the whole incident," she said.

Speaking to ST, Ms Chen, who is in her 20s, said that she made the post with the intention to warn other women.

"I only want to show women that they should stand up for themselves. I was scared, and I realise how scared younger girls would've been if they were in a similar situation," she said.