People showing their vaccination status before entering Tampines Round Market and Food Centre on Oct 13, 2021.

SINGAPORE - New rules forbidding unvaccinated people from dining in at hawker centres and coffee shops that kicked in on Wednesday (Oct 13) have left some confused.

When The Straits Times visited several places, there were checks conducted at some but not others.

Patrons like Mr K. Tang, who works in the logistics sector, was annoyed by the constant checks as he moved from stall to stall.

"I've been asked three times in 10 minutes for my vaccination status at this coffee shop. Why can't they just check once? I will have to show it for a fourth time later when I buy food for my wife. It's so frustrating," he said.

Mr Goh Luo Wei, 30, who runs Cheng Kee Beef Kway Teow at Hougang 203 Coffee Shop, said he was informed by the coffee shop management on Tuesday to check the vaccination status of customers from Wednesday.

His staff had put up a sign on the storefront reminding customers that only those who have been vaccinated are allowed to dine in.

“So far, many customers just said that they are vaccinated, but didn’t show us their TraceTogether app, with many giving the excuse that their phones are at the table,” said Mr Goh.

“This morning, there was a customer who got very angry with us for asking to see his vaccination status, but we are just following the Government’s rules. Why make our jobs difficult?” he added, saying that it was extra work for them on top of dealing with the long queues.

At Tiong Bahru Market and Hawker Centre, officers from the National Environment Agency (NEA) were seen asking the breakfast crowd streaming in about their vaccination status.

One officer reminded an unvaccinated woman that she could only buy food to take away. Despite the usual crowds, operations were smooth and there were no long queues.

At FoodCity coffee shop in Tampines Street 11,  there were no officers or safe distancing ambassadors walking around and asking patrons to show their vaccination status when ST was there.

Ms Jenny Sim, 45, the supervisor of a drink stall at the coffee shop, said she was told off by a few elderly customers who were frustrated by the checks made by stallholders.

“Some seniors come with their TraceTogether tokens thinking that it would suffice, but we’re not getting them to check in. We’re checking their vaccination status on the app,” said Ms Sim.

She added: “Some customers got angry and said, why is it so hard to get a cup of coffee?”

But at hawker centres in Kovan and Tampines, patrons were seen walking in and out, and having their meals freely.

At Kovan food centre in Hougang Street 21, Mr Peter Soon, 49, a regular there, said: "No safe distancing ambassador checked our vaccination status; it's up to the customer's own integrity."

The warehouse operator was having breakfast with his wife. He added: "I don't feel safer with the new rules because the daily cases are so high anyway."

Stallholders told ST they had not been informed about the need to verify patrons' vaccination status. They were wondering if they needed to do so as enforcement officers were not seen at the entrance of the hawker centre.

Mr William Lim, 65, a chicken rice stallholder at Kovan 209 Market and Food Centre, said: "We were not given any instructions by the authorities to check the vaccination status of our customers. They are paying customers after all. Why would we turn away business just because they are not vaccinated?"

Mr Lim, who said he was frustrated by the constantly changing rules, added: "We are already working very hard to keep business going... we don't need extra work."

On Tuesday, Minister for Sustainability and the Environment Grace Fu had said her ministry would take a pragmatic approach in implementing vaccination-differentiation rules in hawker centres and coffee shops.

NEA, which manages hawker centres, and the Singapore Food Agency, which handles coffee shop operators, had earlier said that they will be working with stallholders to urge unvaccinated patrons against dining in. 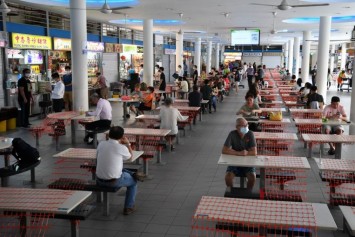 Checks on the vaccination status of diners will be done by safe distancing enforcement officers, who will do this selectively as part of their patrols, said the agencies.

Diners found to have breached these vaccination-differentiated safe management measures will be warned and enforcement action will be taken against repeat offenders and those who refuse to cooperate.

Unvaccinated people are also not allowed to enter malls and large standalone stores, although exceptions will be made for those who need medical or childcare services. Malls and large stores have one week from Wednesday to set up checkpoints. The rules on barring entry for unvaccinated at malls will kick in next Wednesday (Oct 20).

When ST visited two malls on Wednesday, staff were seen struggling with the influx of patrons as they had to manually check their vaccination status.

At Junction 8 in Bishan, a queue formed after 10am as most people started to activate their TraceTogether app to show their vaccination status only when asked to do so at the entrance.

Similarly, there was a queue waiting to enter VivoCity after 10am from HarbourFront MRT station even though the mall had stationed two staff members to check shoppers' vaccination status.