The incident came to light after a video was posted online showing a male teenager spitting from a high floor in a shopping mall.

SINGAPORE - Three teenagers have been arrested over an alleged spitting incident in a shopping mall in central Singapore.

The two males and one female are aged between 17 and 19, the police said in a statement on Thursday (March 12).

The incident came to light after a video was posted online showing a male teenager spitting from a high floor in a shopping mall. A police report was made on March 3.

Investigations showed that an 18-year-old male was on level 4 of the mall when he committed the act on Feb 28 at about 6.30pm. Police did not name the mall.

The act was recorded and the video was later uploaded on his friend's social media accounts. It is unclear how the other two teenagers were involved.

With the help of ground enquiries and images from closed-circuit television cameras (CCTVs), officers from the Central Police Division identified the three teenagers and arrested them.

Investigations are ongoing. Police said in the light of the coronavirus outbreak, such incidents can cause alarm and annoyance.

The arrests came in the wake of earlier incidents also involving teenagers. 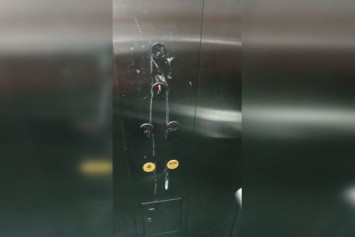 This was after two separate reports, on Feb 23 and 25, were made when spittle was found on the mirrors and buttons inside the lifts of HDB blocks in Punggol Walk and Ang Mo Kio Street 32.

In another case, police quizzed three 15-year-olds after SBS Transit lodged a police report on Feb 20 when spittle was found on the buttons of a lift at Rumbia LRT station.

The teenagers are being investigated for an offence of mischief.

Investigations showed they had spat on the lift buttons on Feb 19 at about 6.10pm.

In a statement on Thursday, police said: "Everyone needs to play their part by observing good personal hygiene and being socially responsible."

Anyone found guilty of being a public nuisance can be fined up to $2,000.

If the public nuisance act is found to have caused or will probably cause common injury, danger or annoyance to the public, those found guilty can be jailed for up to three months, fined up to $2,000, or both.

If convicted of mischief, they can be jailed up to two years, or fined, or both.

Offenders under the age of 16 cannot be jailed.