32-year-old migrant worker dies after being crushed by crane parts; 27 dead from worksite accidents this year

The accident occurred at 1 Mandai Quarry Road, where the Home Team Tactical Centre is located.

SINGAPORE - A migrant worker died on Wednesday (June 22) after being crushed between the undercarriage of a mobile crane and its counterweights.

This takes the total number of workplace fatalities here this year to 27.

The accident occurred at 10.15am in 1 Mandai Quarry Road, where the Home Team Tactical Centre, a facility where elite officers from the police and Singapore Civil Defence Force undergo joint training, is located.

The Ministry of Manpower (MOM) said the 32-year-old from India was retrieving shackles from a toolbox located underneath the chassis of the crane when the crane turned clockwise and crushed him.

The police were alerted at 10.20am, and the worker, employed by Hwa Yang Engineering, was unconscious when taken to Khoo Teck Puat Hospital, where he died.

MOM said the Singapore Police Force is the developer of the work site and the occupier is China Construction (South Pacific) Development Co (CCDC).

Investigations are ongoing, and the ministry has instructed CCDC to stop all lifting works at the site. The police said they do not suspect foul play.

According to an internal e-mail seen by The Straits Times, CCDC said the worker who died was a trained rigger and signalman.

He is the second worker to die in an accident at a CCDC work site this year.

In February, a 49-year-old worker employed by the firm died after the forklift he was driving toppled sideways and he was thrown out of the vehicle.

At the time of the accident, which occurred at a Build-To-Order project site in Tampines Street 64, the Chinese national was not wearing a seat belt. 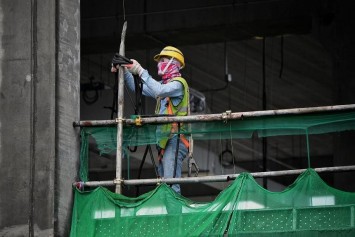 According to MOM's website, CCDC is currently enrolled in the ministry's Business Under Surveillance programme, which is designed to help firms with a poor workplace safety record raise their standards.

A subsidiary of China State Construction Engineering Corporation, the world's largest engineering and construction company, CCDC has undertaken more than 200 projects here. It marked 30 years of operations in Singapore this year.

The 27 work-related deaths so far this year is the most recorded over the same period since 2016, when 42 workers died in the first six months of the year.

The recent surge in fatalities prompted a call last month for employers here to implement a safety time-out, but the death toll has continued to climb.

Authorities have said that inadequate control measures, a lack of compliance with proper work methods, and insufficient safety awareness among workers are to blame for the recent spate of deaths.

Last week, MOM raised the penalties for companies with poor workplace safety and health performance, doubling the composition fines for offences observed during safety inspections, up to a maximum of $5,000.

Companies which have been issued stop-work orders or have had workers experiencing major injuries will also have to engage external auditors to review current systems.

Meanwhile, the ministry has also devoted more resources to conduct 25 per cent more inspections in the second quarter of this year compared with the first quarter. In the first three months of this year, it conducted close to 1,700 inspections.

It said on Wednesday that as a general safety measure, physical barricades and warning signs should be put up when cranes are in operation.

All persons should also be reminded to stay clear of such danger areas.