A 33-year-old man died and two others were injured in an accident on the Ayer Rajah Expressway that involved almost 10 vehicles.

SINGAPORE - A 33-year-old motorcyclist was killed after an accident that involved nine vehicles on the Ayer Rajah Expressway (AYE) on Wednesday (Sept 12).

Police said that it was alerted to the accident at 5.19pm. The accident involved six cars, two motorcycles and a lorry, and happened along the AYE, towards Tuas.

One of the motorcyclists, the 33-year-old man, was found lying motionless and was pronounced dead at the scene by paramedics.

The Straits Times understands that the man is a Malaysian.

A male car passenger and another male motorcyclist, aged 26 and 29 respectively, were conscious when taken to National University Hospital, said police. 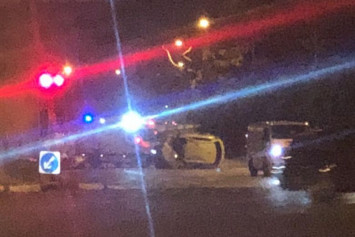 A photo of the accident was circulated on the Telegram group SGRoad Blocks / Traffic News, with members warning of a traffic jam that involved three lanes.

Photos posted on the SG Road Vigilante Facebook page show a man sprawled on the road, with a motorbike lying a few metres from him. A video uploaded in the same post shows a car passing by a blue tent at the accident scene.