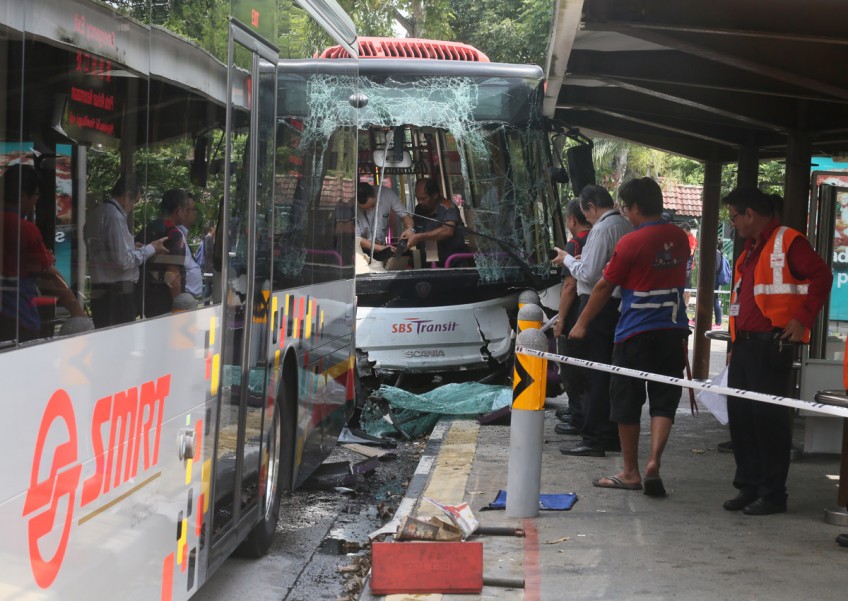 33 people were injured after an SMRT bus and an SBS Transit bus collided at a bus stop along Jalan Jurong Kechil in Bukit Batok on Friday morning (May 11).

SMRT bus service 970 had stopped at the bus stop when it was hit from behind by SBS Transit bus service 157.

Responding to a Stomp query, the police said they were alerted to the accident at 9.03am.

Most of them had minor injuries.

Photos show the SMRT bus with a dented rear, while the SBS Transit bus had a shattered windscreen.

SMRT's Vice President for Corporate Communications, Ms Margaret Teo, told Stomp that its bus captain was among the injured.

She said in a statement to Stomp: "At around 9.05am this morning, an SMRT bus (service 970) that had stopped at a bus stop along Jalan Jurong Kechil was hit from behind by another bus (service 157).

"Our bus captain and several passengers were injured.

"Our immediate priority is the well-being of our passengers and staff who were aboard our bus. Our CARE team is reaching out to them to render assistance.

"We would also like to apologise to affected passengers who were inconvenienced by this morning's accident.

"Meanwhile, we are assisting the police in their investigations."

Ms Tammy Tan, SBS Transit's Senior Vice President of Corporate Communications, said: "At about 9.05am this morning, SBS Transit Service 157 collided into an SMRT bus at a bus stop along Jalan Jurong Kechil.

"A total of 34 persons from the two buses were conveyed to three hospitals. Five SBS Transit communications teams are now at the hospitals to render assistance to the injured.

"We are very sorry that this has happened and our priority now is the well-being of all injured passengers."

Ms Tan added that the company was also assisting the police and Land Transport Authority (LTA) in their investigations.

A video published by The Straits Times shows the SMRT bus being towed away at 11.30am.