36 hours of torture: This working mother in Singapore struggles to return home to Johor after 1-year-old daughter contracts Covid-19 there

A Malaysian mother working in Singapore found herself helpless and in tears after finding out that her one-year-old daughter in Johor Bahru (JB) had contracted Covid-19 and was running a high fever.

The mother, 32-year-old Qin Li Lin, works in Singapore as a legal consultant while her husband, an engineer, is also based in Singapore, reported 8world.

Due to their jobs, this Malaysian couple's daughter has been cared for by both sides of the family since she was a baby.

Last Thursday (March 10) however, Qin was informed that her brother-in-law was diagnosed with the coronavirus. Qin immediately arranged for her daughter to be isolated.

However, Qin's mother-in-law came down with the virus the next day, and her daughter started to show signs of a fever that night.

Qin had no choice but to ask her mother to bring the child to the hospital, while she frantically tried to book a Vaccinated Travel Lane (VTL) bus ticket back to JB.

Qin said that at the hospital, her daughter was found to have a raging temperature of more than 39 degree Celsius. Medical staff administered a polymerase chain reaction (PCR) test, which turned up positive.

After learning of her diagnosis, Qin spent the next few hours in torment as she tried in vain to procure a VTL ticket back to JB to be with her daughter.

In desperation, Qin even contemplated buying a plane ticket to Kuala Lumpur and taking a taxi to JB.

Thankfully, Qin had the support of her boss, who stepped in to help after learning about her situation.

She approved her urgent leave application immediately and after learning of her struggles finding a way back home, she contacted the deputy director of a transport company here who helped Qin secure a ticket.

With their combined efforts, Qin managed to return to JB on March 13.

In an interview with 8world, Qin recounted the harrowing 36-hours after learning of her daughter's condition.

"As a mother, those 36 hours was torture. I could only watch my daughter scream her lungs out while I cried along with her from the other side of the screen," said Qin.

Qin's worry and trepidation have been replaced by a sense of relief, now that her daughter's fever has subsided. She also feels immense gratitude for the help rendered.

"I'm lucky to have been helped by so many people. After I told my boss, she went around helping me to look for tickets. She linked me up to the person in charge at the bus company and I was able to buy a ticket in a very short time."

She added: "The person in charge at the bus company helped to arrange my ticket even though it was already 11pm at night. I'm really grateful to them."

Qin revealed that it is not the first time that her boss had gone out of her way to help her. When she was pregnant and about to give birth, Qin shared that her caring superior even loaned Qin her car, "so that I could comfortably drive back to JB to give birth". 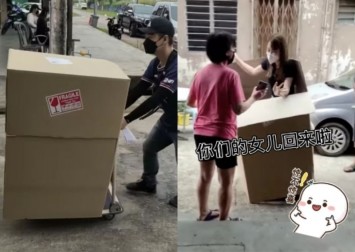 When interviewed by 8world, her boss described how Qin was in tears when she informed her of the situation.

"I know it is hard for her to be here while her daughter is Covid-positive. So I tried all means to help her find a ticket," she explained. "Fortunately, I managed to get in touch with the deputy executive director of the bus company and she stepped in to help."

The company manages the Causeway Link VTL bus service between Singapore and JB, as well as private transport services within Malaysia.

She revealed that the company has 100 reserve bus tickets daily, and passengers can apply for them through their website. However, she warned that the tickets are only for travellers with emergencies and only those who are in urgent need should apply.