The police said that sellers became uncontactable after payments were made through bank transfers.

Four people have been arrested for their suspected involvement in separate e-commerce scams that left buyers in the lurch after payments were made for face masks, hand sanitisers and other items.

The crackdown comes amid a high demand for masks and other items used in the fight against the coronavirus, with panic buying leaving store shelves empty.

The police said in a statement on Saturday (Feb 22) that they had received many reports between Jan 2 and Feb 19 from people who said they had been cheated by online sellers advertising face masks for sale.

The sellers became uncontactable after payments were made through bank transfers, the police said.

Read Also
Carousell user loses $750 to face mask scammer, offers $3,000 to anyone who can track him down 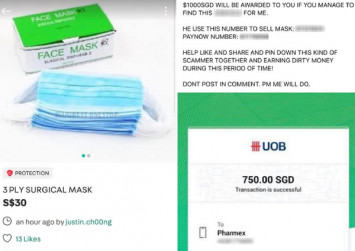 Following investigations, the police arrested two men, a woman and a teenager on Thursday for their suspected involvement in more than 250 scams that took place on e-commerce platforms and online channels such as Gumtree, Facebook Marketplace, Carousell, WhatsApp and Telegram.

Three have been charged with cheating, and face punishment of up to 10 years in prison and a fine, if convicted.

A 15-year-old boy will face the same charge in court on Monday.

Giving a breakdown of the cases, the police said that a 37-year-old man is believed to be involved in at least 200 scams that total more than $90,000.

His victims had responded to advertisements for face masks, hand sanitisers and thermometers on online marketplace Carousell, where they were directed to make advance payment through a bank transfer.

Her victims had responded to an advertisement for face masks on Facebook Marketplace, where they were directed to communicate via WhatsApp to arrange payment.

A 22-year-old man who hawked face masks and concert tickets is believed to be involved in at least 10 scams amounting to more than $8,000. 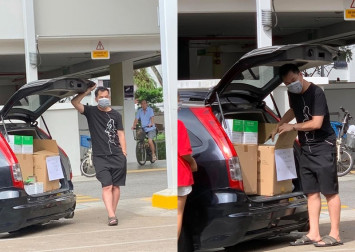 He advertised on Carousell and a Telegram group chat called "SG free MarketPlace", and had also directed victims to make bank transfers.

The 15-year-old is suspected to have been involved in at least five scams where victims were cheated of more than $16,300.

He had advertised for sale face masks, skincare products and hotel staycation packages on Gumtree and Carousell.

The police said they take a serious view of those who would take advantage of the Covid-19 outbreak to commit crimes, adding that offenders will be dealt with sternly.

They should avoid making payments or deposits in advance, and use reputable platforms that hold payment to sellers until items are received, the police said.

More information on scams can be found at www.scamalert.sg.

Anyone with information on scams can call the police hotline on 1800-255-0000 or submit information online at www.police.gov.sg/iwitness.

All information will be kept strictly confidential, the police said.