Changi Airport Group (CAG) will be resurfacing some of the turns along the Changi Airport Connector to improve slip-resistance, the group told AsiaOne today (Oct 22).

"Signs warning of slippery patches will also be put up to advise cyclists to slow down," they said.

The group added that prior to the launch of the track, speed-reducing strips and signs reminding cyclists to slow down were printed onto the track surface. Staff were also deployed along the path to ensure the safety of track users, on top of enforcing safe distancing measures.

Since the launch of a new path connecting Changi Airport Terminal 2 and East Coast Park on Oct 11, plenty of eager visitors have flocked to the east to check out the sunny island's latest attraction.

With the route spanning 3.5km and bicycle rentals available at either end of the road, it's no wonder the two-wheeler has been the popular mode of transport for many people.

However, a cyclist voiced his concerns after realising there's a particularly slippery bend along the path, where at least five cyclists have slipped and fallen on a rainy morning.

Speaking with Lianhe Zaobao, the cyclist recounted how he and four other cyclists slipped and fell at the exact same place on the path on Sunday (Oct 18).

"I was having breakfast at a nearby coffee shop around 8am when it suddenly started to rain. The rain lightened up after 15 minutes, so I began to cycle home.

"However, just as I passed the bend outside Terminal 4's car park, the road was so slippery that I fell," he told the Chinese daily. 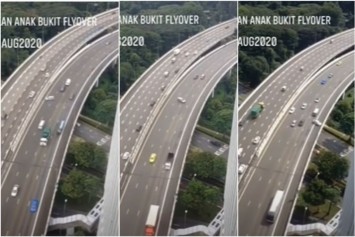 He suffered scratches on both arms as a result.

Less than five minutes later, he saw another passing cyclist falling at the same spot.

A passer-by told him that three other cyclists had tumbled over their rides in the area earlier that morning.

The cyclist observed eight such bends along the path within the vicinity of Changi Airport's car park alone. While there are speed bumps installed before the bends, the rain had left the path too slippery for bicycle tyres to get a good grip.

A Zaobao reporter shared the same observations although the path was dry during their visit, noting that it would be safest if riders were to dismount their bicycles before making the turn.

AsiaOne has reached out to Changi Airport Group for comment.