While playing with a lighter in the storeroom, a five-year-old boy with special needs accidentally set fire to his family's rented HDB flat.

A woman and her three children who were in the unit managed to escape when the fire broke out, Lianhe Wanbao reported.

It added that the family of five who lived in the flat were of Myanmarese nationality. The woman's husband Aung, 50, is an engineer and a Singapore permanent resident who came here for work 15 years ago.

His wife, 43, is a full-time housewife taking care of their three kids — the boy and two girls who are in Primary 3 and 4.

When interviewed by the Chinese evening daily, Aung said he was not at home when the fire occurred, while his wife was busy doing housework.

He is uncertain how his son managed to get his hands on a lighter, adding that it all happened very quickly. The storeroom which caught fire contained old newspapers as well as diapers.

Thankfully, the couple's nine-year-old daughter saw the fire when it ignited and ran to tell her mother. But when she turned back to look, the fire had already spread. 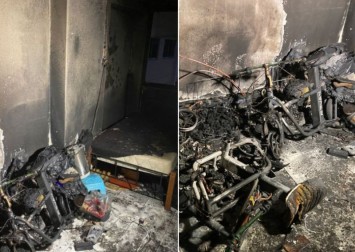 In a state of panic, Aung's wife sought help from their neighbour who called the fire department. They reminded Aung's wife to get her children out of the flat as quickly as possible.

The neighbour Bella, 53, said: "When the SCDF personnel arrived, they knocked on our doors and asked us to evacuate. Suddenly, we heard a loud explosion from the unit. We got a shock and quickly escaped from the other side of the corridor."

According to the SCDF, around 60 residents were asked to evacuate their homes, with one person treated on site for a slight injury. Residents were able to return to their homes after an hour. No one was conveyed to hospital and the cause of the fire is being investigated, said the SCDF.

Aung's wife told Wanbao that the couple's five-year-old son has a language disability. He would be sent to a special school whenever they are back in Myanmar, but with the ongoing pandemic, they've been unable to return.

She added: "I try to tell him what he can and cannot do, but he doesn't understand, I can only teach him slowly."

She explained that with her husband's sole income, they are unable to afford fees for special schools in Singapore. Hence, their son has been spending his time at home.

Aung added his monthly salary is usually just enough for the family to get by. But now, he expects that he would have to pay compensation for the damages incurred in the fire.