The Asana condomium along Queens Road.

A five-year-old girl drowned in a condominium pool after her mother left her unattended for about 20 minutes to head home for a toilet break.

The incident happened on Oct 8, 2020, at The Asana condominium located at Queen's Road.

In a coroner's inquest on Friday (May 5) to determine the cause of death, the investigation officer and two other witnesses were brought to the stand, reported Lianhe Wanbao.

The investigation officer told the court that the mother had brought her daughter to the pool for a swim at 6.10pm.

But not long after, the mother went back up to their apartment to go to the toilet, leaving the girl at the pool by herself.

The mother also spent some time in the kitchen preparing dinner for the family. She returned about 20 minutes later.

According to surveillance camera footage, the girl was seen walking along the side of the swimming pool, from the main pool to the jacuzzi pool and back again.

At about 6.20pm, CCTV footage of a partially-obscured area of the pool captured some splashes on the surface of the water. Following that, a blue-coloured kickboard was seen floating away. The investigation officer surmised that that was the moment the girl fell into the pool.

The mother reappeared at the poolside at 6.31pm, based on CCTV footage. She circled the pool several times searching for her daughter before frantically approaching the security guards at their post for help.

A security guard spotted a body face down in the pool and dived in. He placed the unconscious girl on a deck chair by the pool. A resident, who came out to help upon hearing the mother's distraught cries, performed CPR on the girl.

The ambulance arrived and took her away to the hospital, but she never regained consciousness. After three days, the girl's parents made the heartbreaking decision to take their daughter off life support.

According to investigations, the girl was unable to keep herself afloat as she wasn't proficient in swimming. She had only attended three swimming classes prior to the incident.

The depth of the pool where the girl was suspected to have drowned was 1.2m while she was 1.06m tall.

The mother had shared that on previous occasions where she brought her daughter swimming, the latter usually enjoyed playing in the kids' pool, but would head to the jacuzzi pool area when she saw other children playing there.

The mother indicated that on one of those occasions, she watched her daughter from the gym. Even though the view of the jacuzzi was obstructed from where she was, she trusted that her daughter would be safe because there were other adults in the pool. 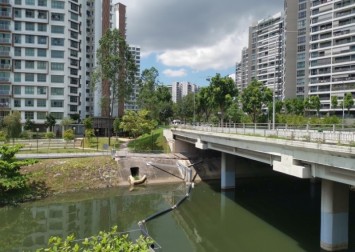 The coroner's verdict on the child's death has been postponed to a later date after the child's father indicated in court that he had additional queries regarding the report.

He raised the question of whether a Caucasian man, who was seen in the CCTV footage, had been interrogated during investigations. He put forth a question if the girl could have been pushed into the pool.

The Causcasian man was seen in the same frame walking up to his apartment shortly after the kickboard floated away.

In response, the investigative officer said she had contacted the man for an interview. The resident in the condominium had said that he did not see the girl or the board, and had just entered the condominium from the back gate to go up to his apartment.

The officer did not subject him to further questioning as she felt he was unrelated to the case.

However, the father indicated that he would like to ascertain the time it took the man to walk from the back gate of the condominium to the pool, as the two video surveillance cameras showed different timings.

The coroner agreed to allow further investigations to be conducted, postponing the verdict to a later date.