SINGAPORE - The number of dengue cases in a week has hit a 3½-year high, with 666 cases recorded last week, the National Environment Agency (NEA) said.

In an update on its website on Monday (July 15), NEA said that this figure for the period between July 7 and 13 was 73 more than the previous week.

It also surpasses the previous weekly peak of 637 cases recorded in January 2016.

As of Sunday, there have been 7,374 dengue cases so far this year, about five times more than the 1,481 cases seen in the same period last year.

There were 216 cases reported there as of Monday.

However, NEA noted that there has been a "slowing down" in transmission of the virus in the past seven weeks in the Woodlands cluster. 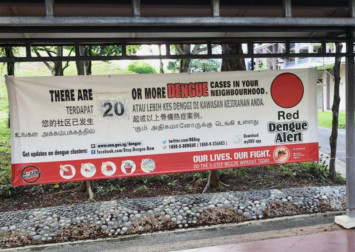 There has been one case reported in the cluster in the past two weeks, compared with 27 cases in a week, when the transmission was at its peak.

Across Singapore, large clusters with a relatively fast rate of dengue transmission have been observed in Pasir Ris, Joo Chiat and Jurong East, NEA added.

There are 48 high-risk areas with 10 or more cases, such as in Bedok, Choa Chu Kang, Tampines, Chai Chee and Pasir Ris.

Already, 44 people have had the more severe dengue haemorrhagic fever this year, and five have died.

During the warmer months between June and October, "a national collective effort is critical to prevent dengue cases from rising further", the agency said.

It added: "Source eradication of mosquito breeding habitats and spraying of insecticides to control the adult mosquito population remain key to dengue prevention."

People with dengue usually have a sudden onset of fever that lasts up to seven days, coupled with severe headache, joint and muscle pain, nausea and vomiting, and skin rash.

In more severe cases, there is haemorrhaging, with bleeding in the gums and nose as well as under the skin, or with blood in the urine and stool.

NEA urged those who are infected with dengue to protect themselves from mosquito bites by applying repellent regularly.

Those who feel unwell should seek medical attention early, it added.

ALSO READ: Just 30 mins to check if you have dengue