Six men and one woman, aged between 30 and 52, were charged with offences under the Covid-19 (Temporary Measures) Act today (June 2).

They were accused of flouting circuit breaker measures after groups of people were seen gathering at various places in Robertson Quay area on May 16.

Another man, Michael Czerny, 45, is Austrian, while Jeffrey George Brown, 52 and the only woman, Bao Nguyen Brown, 40, are Americans.

The four Britons are accused of meeting one another "for a social purpose" near Italian restaurant Rosso Vino, while the other three were said to have met near Tap @ Robertson Quay. 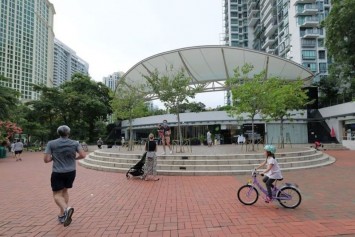 Bao Nguyen Brown is an employment pass holder who has been living in Singapore for 14 years. She is understood to be married to Jeffrey George Brown and they have a son who attends school in Singapore.

Meanwhile, Czerny is a Singapore permanent resident who has two children who, too, are attending school here.

However, court documents did not state whether all seven alleged offenders were employment pass holders.

Their cases have been adjourned to June 16. For each charge, offenders convicted under the Covid-19 (Temporary Measures) Act can be jailed for up to six months and fined up to $10,000.

Last month, photos of crowds along Robertson Quay had circulated on social media, showing people failing to abide by safe distancing measures. Some were also pictured not wearing masks, while others had their masks lowered.

In a Facebook post on May 30, Minister for the Environment and Water Resources Masagos Zulkifli that they "take such breaches very seriously and will not hesitate to take action."

Six men and one woman will be charged in court on 2 June for breaching safe distancing measures at Robertson Quay on 16...

Meanwhile, the Ministry of Manpower released a statement on June 1 reminding foreigners holding work passes in Singapore must abide by the country's laws.

Those who are found guilty of breaking the law risk getting banned from working in Singapore.

"These measures are enforced strictly regardless of nationality," the manpower ministry said.

In April, a work pass holder had his pass revoked and was banned from working in Singapore after he breached circuit breaker measures by loitering at various places, only returning to his place of residence the next day.