A 73-year-old man has been arrested in relation to a fire that broke out in a flat on the 10th storey of Block 39 Telok Blangah Rise early on Saturday (Jan 29).

It is understood that the man, arrested for mischief by fire, lived in the unit. At least two people were injured as a result of the blaze.

It was the third blaze that firefighters had to battle in one night, following separate incidents hours earlier in Bedok and Tampines.

The Singapore Civil Defence Force (SCDF) said in a Facebook post that officers performed cardiopulmonary resuscitation on a woman who was found unconscious in the unit directly above the fire.

Firefighters had conducted a forced entry into her home during an evacuation of residents from neighbouring units while firefighting operations were being carried out. She was taken to Singapore General Hospital, together with another person who had smoke inhalation injuries, said SCDF.

The force was alerted to the fire at about 4.40am. 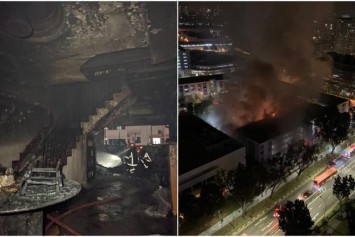 "Upon SCDF's arrival, the fire was raging and had totally engulfed a unit on the 10th floor," it said. "Firefighters donned breathing apparatus sets and proceeded cautiously into the smoke-logged unit. The fire, which involved contents of the entire unit, was extinguished with two water jets."

About 280 people were evacuated as a precaution, said SCDF.

The blaze in Telok Blangah happened after fires broke out in two locations in eastern Singapore late on Friday.

At about 10.30pm on Friday, the SCDF was alerted to a raging fire at a two-storey flat at Block 941 Tampines Avenue 5.

SCDF officers had to break down a bedroom door in the 10th-storey unit to rescue an unconscious man trapped inside. The man was taken to Changi General Hospital.

At midnight, a fire at a coffee shop at Block 204 Bedok North Street 1 prompted firefighters to evacuate 55 people living in flats above the eatery.

Firefighters deployed water jets around the premises to contain the fire. There were no reported injuries in the Bedok fire.

The causes of the three fires are being investigated.

Fires of electrical origins such as faulty wiring are the leading cause of all blazes here, accounting for nearly 30 per cent of all blazes in 2020, SCDF said in its latest full-year fire-incident statistics.

The next most common cause are fires involving cooking activities, such as overheating of food.

SCDF has cautioned against overloading electrical outlets with appliances, and to ensure that appliances are switched off when not in use. Appliances should be checked for frayed wires and cracked cords, and should be repaired or replaced if these are observed.