There are 9 new Covid-19 deaths involving patients aged between 57 and 100.

SINGAPORE - Nine Singaporeans aged between 57 and 100 have died from complications linked to Covid-19, taking Singapore's virus death toll to 233.

Six were men and three were women, said the Ministry of Health (MOH) on Sunday (Oct 17).

Two were vaccinated and seven were unvaccinated. All except one unvaccinated patient had underlying medical conditions, MOH said in its daily update, without giving further details.

Of those who died of such complications over the past 28 days, 25.9 per cent were fully vaccinated and the rest were either unvaccinated or partially vaccinated.

Sunday was the 28th day in a row that deaths from Covid-19 were reported.

There were 3,058 new Covid-19 infections in total, MOH said. They comprised 2,454 new cases in the community and 601 in migrant worker dormitories. Three cases were imported. 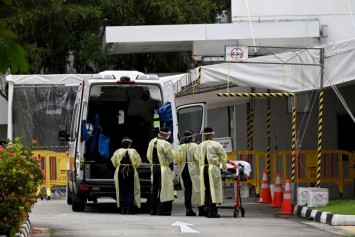 As at Sunday, 15,918 patients were recovering at home, with 2,986 patients in community care facilities and 734 patients in Covid-19 treatment facilities.

There were 1,651 patients in hospital, up from 1,464 on Saturday, with 327 patients requiring oxygen support.

The number of patients in the intensive care unit increased to 66 from 62 on Saturday.

Among the large clusters that are being closely monitored by the ministry, five had new cases.

The largest highlighted cluster was at MWS Christalite Methodist Home in Marsiling, which detected two new cases for 109 in total. Of the 109, 15 are staff and 94 are residents.

Four new cases were also added to Econ Medicare Centre and Nursing Home in Buangkok, bringing the size of the cluster to 63. Of these, 60 were residents and three were staff members.

Apex Harmony Lodge, a purpose-built lodge for people with dementia located in Pasir Ris, had two new cases for a total of 12. Of the 12 cases, four are staff and eight are residents.

A new case was also found at Learning Vision pre-school at Changi Airport. Of the 17 cases, two are staff, 13 are students and two are household members of patients.

My World Preschool at Hougang Dewcourt also had one case for 14 total. Of the 14 cases, three are staff, nine are students and two are household contacts of cases.

The total number of cases in Singapore stood at 148,178 as at Sunday.

So far, 84 per cent of the population has been fully vaccinated and 85 per cent has received at least one dose.

A total of 577,069 individuals have received their booster shots and another 88,000 have booked their appointments.