Up to $900 cash help for Singaporeans in supplementary budget, Government to freeze fees and charges for a year

Besides the cash payouts and rebates to families, the Government will also double the $10 million grant to self-help groups over two years so that they can help more families.

SINGAPORE - Cash payouts announced in Budget 2020 last month will be tripled, with all adult Singaporeans receiving $300, $600 or $900 depending on their income, Deputy Prime Minister Heng Swee Keat said on Thursday.

The amount for parents with at least one Singaporean child aged 20 and younger this year will also go up to $300, from $100 before.

Today, many Singaporeans are worried about how they will pay bills and household expenses if their livelihoods are affected, given the uncertainty. "We will put more cash in the hands of all families to help them cope," Mr Heng said in delivering the supplementary budget.

Mr Heng added that the $100 PAssion Card top-up for seniors, announced during his earlier speech, will also be given in cash instead. They will get their money directly in their designated bank accounts.

"This is to avoid the need to queue at top-up stations during this period," he said.

The Workfare Special Payment for lower-income workers will also be increased to $3,000 in cash each, Mr Heng said. Originally, these workers were to receive payouts amounting to 20 per cent of their Workfare Income Supplement payout last year.

Besides the cash payouts and rebates to families, the Government will also double the $10 million grant to self-help groups over two years so that they can help more families. 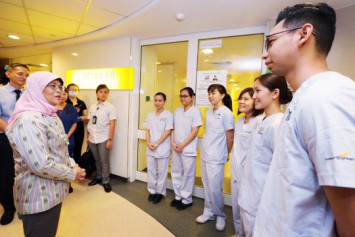 The five Community Development Councils, which run schemes to meet the needs of families in their areas, will also get $75 million up from $20 million before.

All these measures are part of the $1.6 billion Care and Support package announced during last month's Budget. The package will now cost a total of $4.6 billion.

The Government will also freeze all government fees and charges for one year, starting from April and ending March 31 next year.

It will also suspend all loan repayment and interest charges for graduates who have taken government loans for university and polytechnic studies, starting from June and ending May next year.

This is to help graduates who are worried about having to pay off student loans while finding jobs in this economic climate, Mr Heng said.

He added that late payment charges on Housing Board (HDB) mortgage arrears will also be suspended for three months to help those who are struggling with mortgage payments.

"HDB will continue to exercise flexibility when providing assistance during this period, through existing measures such as deferring payment of loan instalments for six months," he said.

Mr Heng noted that the labour movement has also been helping workers and self-employed persons.

Last week, the National Trades Union Congress (NTUC) announced a $25 million fund to provide one-off relief of up to $300 for low to middle-income union members.

It also announced a $4 million top-up to the Self-Employed Person Training Support Scheme on Wednesday, which will give union members an additional training allowance of up to $1 an hour.

This is on top of an increase in the hourly training allowance from $7.50 to $10, which was announced by Mr Heng in his statement on Thursday.