About half of dorm operators flout licensing conditions each year, says Josephine Teo

Manpower Minister Josephine Teo said accommodation standards for migrant workers have become better over the years, but acknowledged that further improvements can be made.

This amounts to nearly half of the 43 such dormitories regulated under the Foreign Employee Dormitories Act (Feda), which together house some 200,000 workers.

An average of 1,200 employers a year have also been punished for providing unacceptable accommodation for their workers, said Mrs Teo, responding to questions from MPs, including Workers' Party MP Png Eng Huat (Hougang), who asked about the virus outbreak among foreign workers.

She told the House on Monday (May 4) that accommodation standards for migrant workers have become better over the years, but acknowledged that further improvements could be made.

The living conditions in these large dormitories have been under scrutiny in recent weeks as the number of workers infected with Covid-19 rises.

"We will see how standards can be raised, but keep in mind there are also older dorms which perhaps might not have reached these standards yet," said Mrs Teo, after showing MPs pictures of living conditions in newer dormitories.

The minister said that when lapses are found, these must be rectified immediately. Dorm operators can be fined up to $50,000, jailed for up to a year, or both for such offences.

For other housing types, employers can be fined up to $10,000, face a jail term of up to one year, or both under the Employment of Foreign Manpower Act.

She pointed out that her ministry has about 100 dormitory inspectors who work under the supervision of the Commissioner for Foreign Employee Dormitories, two deputy commissioners and eight assistant commissioners.

Last year, these officers conducted 1,200 inspections and 3,000 investigations across the different housing types in which foreign workers in Singapore are accommodated.

Apart from the 200,000 workers housed in large dormitories, there are about 95,000 workers living in factory-converted dormitories. Most of these workers are from the construction, marine and process sectors.

Another 20,000 workers are housed in temporary quarters on construction sites. 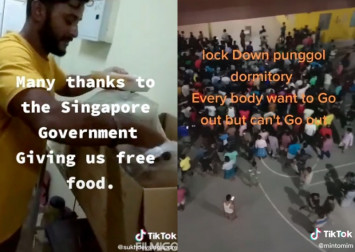 There are also 85,000 work permit and S Pass holders from the construction sector who live in HDB flats, private residential premises and other sites.

While the Covid-19 situation in large dormitories are "largely stable now", the situation in factory-converted dormitories and quarters at construction sites presents a mixed picture "and (is) taking up much bandwidth".

Responding to concerns raised by MPs, Mrs Teo said the Government has "taken steps to raise the housing standards of our migrant workers" over the years.

It passed Feda in 2015, which imposes higher standards on dormitories that accommodate 1,000 or more workers - the Act requires recreational facilities to be provided, as well as amenities like mini-marts and Wi-Fi in common areas.

"They are also required to have health facilities like sickbays or isolation rooms and draw up contingency plans for quarantine arrangements," she said, adding that the Ministry of Manpower (MOM) had asked all Feda-licensed dormitories to set aside at least 10 quarantine rooms each in February, which have proved useful for isolating close contacts in facilities with few infected workers.

For smaller accommodation types that are not covered under Feda, they have to comply with regulations under different agencies, she said.

Mrs Teo also took MPs through how workers came to be housed in such large dormitories, noting that as more construction workers from China, Bangladesh, Myanmar and India came to Singapore in the early 1990s, the Government allocated land for self-contained dormitories with recreational facilities to be built.

Explaining the thinking behind housing them in these communal facilities, she said: "One important consideration was what would a migrant worker want at the end of the work day, if he cannot be with his family? Well, it is to be with his friends, cook a meal he would like, practise his religious beliefs." 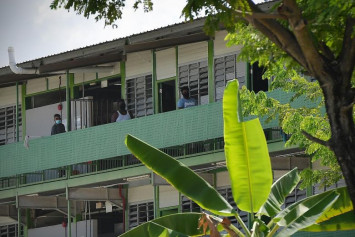 But she also said that such environments now carry the risk of significant Covid-19 transmission, and there was a need to relook how people interact in homes and workplaces.

"What changes will be effective in reducing the transmission risks? Will these changes require different space requirements and technical standards or stronger regulatory levers that Mr Louis Ng (Nee Soon GRC) asked about?" she said.

"When this is over, we will reflect and thoroughly look into areas where we could have done better, so that we will be better prepared the next time."

She told members that Singapore has a responsibility to its migrant workers, many of whom have made personal sacrifices to come to work in Singapore and contribute to its development.

"We will do everything within our means to make sure that they too win the fight against Covid-19, and reunite with their families in time to come," she said.