Accident on CTE leads to another accident

Footage of the crash shows a red car travelling at high speed and slamming into the back of another, causing the latter to turn turtle.

Two men in their 20s were arrested for suspected drink driving in separate but related accidents along the Central Expressway (CTE) before the Yio Chu Kang Road exit yesterday (Jan 31) morning.

The second accident, which involved a motorcycle, happened while police officers were attending to the first.

Both the rider and the driver of the car in the first accident were arrested for suspected drink driving.

The police said they were alerted to the first accident at about 1am.

Footage from a dash camera of a car on the left-most lane that was uploaded on SG Road Vigilante's Facebook page shows a red car travelling at high speed along the CTE towards the Seletar Expressway before the Yio Chu Kang Road exit.

The person who uploaded the video was a Grab driver who was on his way to drop off his passengers.

The driver, who wanted to be known only as Mr Lam, 43, told The New Paper yesterday: "I heard the sound of a roaring engine and knew that there was someone speeding. I slowed down to brace for an impact. But the driver in front of me was not able to slow down in time."

The video shows the speeding car swerve before slamming into the back of a blue car. It is then seen spinning before crashing into the barrier on the side of the expressway.

The impact of the collision caused the blue car to turn turtle and debris to be strewn across all five lanes of the expressway.

Mr Lam, who called the police to report the accident, said the driver of the speeding car was able to get out of the vehicle.

But the driver of the car that turned turtle looked to be in a bad condition, he added.

The Singapore Civil Defence Force (SCDF) said the driver of the car and his passenger were taken to Sengkang General Hospital. TNP understands the driver was a 44-year-old male and the passenger was a woman. Both were conscious. 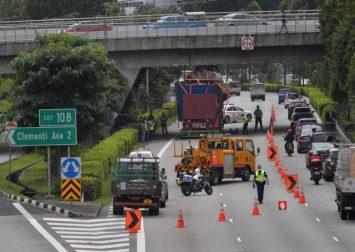 One other person refused to be taken to the hospital, SCDF added.

A second collision occurred while police officers were attending to the accident. Police said a motorcycle hit a police car belonging to the officers at about 1.30am.

The 29-year-old male motorcyclist was arrested for suspected drink driving. No injuries were reported for this accident.

The police are investigating both accidents.