After 13 days in ICU, Case 119 finally won his battle against coronavirus

Alexandra Hospital medical staff putting on personal protective equipment before attending to a patient. Ben said he felt bad on occasions when he had to call for help just a few minutes after a nurse left his room, as the nurse would have to put on the protective gear every time he or she came.

Visions of a strange office. Dreams in an unfamiliar language. Breathing through a tube.

It was a nightmare that he had just woken from - except he was fighting for his life.

For several days, Case 119 was sedated and hallucinating, until he finally won his battle against the coronavirus.

The 55-year-old, who had no travel history to any affected country and wishes to be known only as Ben, spent 13 days in the intensive care unit (ICU) of Alexandra Hospital (AH).

Doctors say that 80 per cent of the patients infected by the coronavirus suffer only mild symptoms. Only 5 per cent of the cases turn out to be as severe as Ben's, who literally had to fight for his life.

He was so touched by the treatment he received that he returned to the hospital last Friday to thank the staff. Here is an account of his struggle.

It began innocuously enough with a fever of 37.2 deg C and a visit to a general practitioner on Feb 27. On Feb 29, when he visited the GP again, it had risen to 38 deg C. He had no other symptoms.

He walked down to AH on March 1 as the fever would not go away. There were no breathing difficulties. He was given a medical certificate and sent home. March 5 Things went downhill fast. Not only was Ben diagnosed with Covid-19, but his condition also deteriorated so quickly that the doctors feared the worst.

Ben had gone to AH again at 11am with a 37.4 deg C fever, and tests showed that he had a viral infection. Although he said he was not breathless, his oxygen saturation level was very low.

He was administered high levels of oxygen via an oxygen mask.

"As he required quite a fair bit of oxygen, we transferred him to ICU for closer monitoring. We suspected he had Covid-19," said Dr Liew Mei Fong, the head of the ICU, who was called in at noon to review his condition.

His fever went up and down and his lungs became increasingly inflamed and starved of oxygen.

By 6pm, his condition had worsened considerably in ICU and it was clear he had to be put on life support. Around that time, his Covid-19 lab test results came back positive.

His condition deteriorated very quickly, said Dr Liew, who then inserted a breathing tube that was connected to the ventilator, into his windpipe through the mouth, to help him breathe. She performed the intubation procedure in full protective gear to guard against being infected with the virus.

What Ben had was acute respiratory distress syndrome, or Ards, a severe lung condition and a common cause of death in critically ill Covid-19 patients.

She said patients with diabetes and high blood pressure, like Ben, have worse outcomes in severe Covid-19 infection. He was put on Kaletra, an HIV drug combination that has been found to be effective in treating Covid-19 patients.

"When I heard the word life support, I almost freaked out," said Ben. "My mind went blank for a while."

He texted his family to tell them about his condition, and then he texted a close friend to tell him where his will was and that "if something happens to me, please let my family know about my will".

That night, Dr Liew left the hospital around 11pm, after stabilising Ben's condition.

The hallucinations started while he was barely conscious.

"When I was intubated, I remembered waking up to an office space that I was not familiar with," he said.

"It was scary in the sense that I had no control. I could not get out of it."

In one scene, he was staring at an office space which had tables, filing cabinets, a clock, and no one in it.

In the second scene, words - in Korean, a language he does not understand - kept flashing at him.

"I tried closing my eyes but I could not escape from it," said Ben, who was having these hallucinations while heavily sedated.

"All I was thinking was oh please, I just want to get out of it, I couldn't take it! And then I just went into the next scene."

Dr Liew said Ben suffered from ICU delirium, which is very common in patients who are critically ill and on high doses of sedation.

"If they are not properly sedated, we will not be able to relieve them of the work of breathing on the ventilator, and that will further worsen the inflammation in the lungs."

After four to five days, Dr Liew said she was able to gradually wean Ben off the breathing support provided by the ventilator as well as the sedation.

"I remembered being asked if there was any pain and I was able to blink my eyes," Ben said.

"I have to say they were very patient. I was asked many times and I finally pointed to the breathing tube. That's when I realised that I was getting better because I could respond slowly to the doctor or to the nurse."

Ben went off the ventilator.

The breathing tube was removed, and he had lower doses of sedative drugs.

He was given lighter oxygen supplementation via a nasal cannula, a device that has two prongs that sit inside the nostrils.

"I remembered I tried to say 'thank you' but I could not utter a word," said Ben.

"The doctor told me my vocal cords were affected so it would take a while."

He tried to sleep but every time he closed his eyes, he would see extraterrestrial species from the movie Predators all over his room.

Ben became aware of his surroundings and saw doctors and nurses bustling about outside. March 13 to 16 He was kept in the ICU for a few more days, just in case his condition worsened again.

His only memories were of the hallucinations. "I couldn't even remember what happened after I got admitted to hospital," he said.

It was the nurses who helped him piece together what had happened. He also read the messages that his family members sent to one another.

"I honestly didn't realise how critical my condition was. I only saw from the messages that my brother sent to my family. One message said my condition had improved but I was unconscious."

The nurses would call him by his name. When he soiled himself, they would clean up after him. They would "turn me to the left, turn me to the right... and move me to a more comfortable position".

He said he felt bad on occasions when he had to call for help just a few minutes after the nurse left his room.

"They have to put on their protective gear every time they come, but they never complained."

"The nurse actually took the trouble to comb my hair. How many people actually comb your hair for you?

"There was one day when I asked if I could get a disposable shaver. The nurse actually went to get one for me so I was very touched."

The doctors and nurses who walked past his room and whom he did not recognise would wave and smile at him.

He said the nurses, who are from Malaysia, Taiwan, the Philippines, Vietnam and Singapore, wanted him to get well. "I felt that without them, I wouldn't get well so fast."

Read Also
Days in ICU scariest of my life: Coronavirus patient in Singapore shares his experience 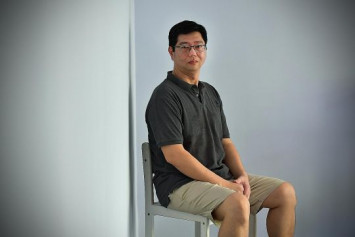 Ben was transferred out of the ICU to the isolation ward as he could breathe on his own.

"I was aware that Covid-19 had killed many people around the world and being admitted into ICU meant there may be a possibility that I may not be able to come out of it alive," he said.

Dr Liew said: "Although Singapore's healthcare system is robust, we should still observe social responsibility and social distancing to stop this pandemic."

The day of discharge.

After three swabs (done 24 hours apart) that tested negative for Covid-19, Ben, who is single, went back to his home, which had been thoroughly cleaned by his brothers.

"I cried a couple of times (during the stay). I cried also when a nurse told me she prayed for me even though she doesn't know me. I also cried when I saw that the nurses were so busy and yet, they took such good care of me," Ben said.

"I realised that I had this misconception that the ICU is like a death sentence... but I realised that it's probably the only place that can save me. I am living proof."

Ben again teared up during this interview as he was so touched by what the doctors and nurses did for him and "so thankful to be alive".