After 18-year wait, NSman remembers to return $80 borrowed from officer

18 years is an awfully long time to wait for someone to repay their debt, especially when the sum is just $80.

Despite the long wait, Derick Khoo's patience bore fruit when his debtor finally returned the sum he owed.

The debtor in question had been one of Khoo's former charges as a national serviceman in the Singapore Armed Forces back in 2002. During one of their 1-to-1 interviews, he had asked to borrow money from Khoo, citing that the pay from the army wasn't enough.

Even after completing his national service stint, the man had yet to return Khoo the money. The man later changed his number and was uncontactable.

At that point, Khoo had already given up on receiving his money.

I am really touched!!! Waited for 18 years and finally!!! Its not about the amount of money, its about a men wanting...

Over the next few years, the two managed to reconnect, during which the other promised Khoo that he'd return the sum. Despite that, he still failed to pay up and eventually changed his number again.

On Jan 17, Khoo received a call from an unknown number requesting for his bank account number. Interestingly enough, the caller referred to him as "sir". Khoo initially thought it might have been a scam call, saying: "Why in this era still call me Sir."

Read Also
Mover who returned $50k cash that customer forgot about: 'My tattoos do not determine my actions' 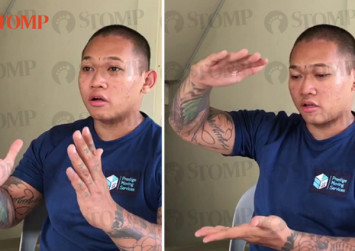 Turns out, it was the same man, calling up and promising that he would most definitely return the sum this time. True enough, he sent a photo of a transaction receipt confirming the transfer of $80 to Khoo.

Having waited 18 years and long given up on seeing the money returned to him, Khoo couldn't believe his eyes. The other had felt rather embarrassed too and remarked: "I paiseh also really, but this time I pay you I feel really good (sic)."

To Khoo, it was not the amount of money, but the action of the other man that caused tears to flow from his eyes.

"He finally did it and step out of that 'always empty promises' him. I see that my man finally wanted a change of his life!(sic)"

Khoo ended off his post with an encouragement for the other man to work hard and not give up. He also donated the sum in the other's name in hopes that the merit would go back to him.

Several netizens commended the man for his honesty and sincerity, commenting that he gave them faith in humanity.

Khoo also received several praises for his patience, including how a "good commander (is) not easy to come by."

On the flip side, let's just say not everyone has the same amount of tolerance to wait that long.

#National Service #Money #In Case You Missed It