SINGAPORE - In a phone conversation, a former key officer of the Aljunied-Hougang Town Council (AHTC) had described its chairman Sylvia Lim as "hopeless" and said the town council would die under her watch.

Ms How Weng Fan, who was AHTC's deputy secretary, also said she felt "played out" by former-WP chief Low Thia Khiang for appointing Ms Lim as the chairman in 2011 and had asked him to take over the position from Ms Lim.

In the 2016 phone conversation with an executive of audit firm KPMG, she went as far as to blame Ms Lim for the death of her husband, who was AHTC's secretary from 2011 to 2015.

A transcript of the conversation was read out by Senior Counsel Davinder Singh in the High Court on Monday (Oct 29) when he wrapped up his cross-examination of Ms How.

Monday was the 16th day of the hearing of a multimillion-dollar civil lawsuit brought against eight defendants, including Ms How and Ms Lim, over alleged improper payments AHTC made to its managing agent FM Solutions and Services (FMSS) and its service provider.

Ms How and her late husband, both WP supporters, were FMSS' main shareholders.

She had been contacted by the KPMG executive who wanted a meeting with her. 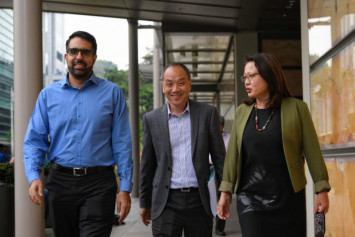 AHTC had appointed KPMG in 2016 to look into the town council's books, after a special audit by the Auditor-General's Office (AGO) found significant governance lapses at the town council.

Referencing the phone conversation, Mr Singh charged that when KPMG stepped in to do its review, everything Ms How and her husband had "worked for" with the other defendants to benefit FMSS, despite the conflict of interest, had started to "unravel".

It led to "fingers being pointed at each other", Mr Singh added, alluding to Ms How's scathing comments of Ms Lim.

But after he pointed out that in the phone conversation she had blamed Ms Lim for AHTC's problems, Ms How said this was because her husband had died and she held Ms Lim responsible for failing to stand up to the AGO report at the start. Ms How had told the KPMG executive: "You know I had to lose my husband in the process. And because of her (Ms Lim)."

Justice Kannan Ramesh asked her to further explain her remark.

Ms How said her husband was under a lot of pressure and "went through hell" to set up AHTC properly, amid the many problems it faced.

"Nobody wants to listen to the problems we were facing and going through," she added, pointing out that they had to deal with the AGO's investigations and audits from KPMG and PwC.

She said her husband was under great stress and died of a heart attack in Japan in 2015, adding that the media wrongly reported that he had an accident there.

Ms How also said that because of the AGO report, Ms Lim imposed liquidated damages of $250,000 on FMSS.

The court also heard on Monday that Ms How told KPMG the town council was not going to defend her because of an arbitration process between FMSS and AHTC.

"They don't know by not defending me, they are just digging their (own) grave," she had told the KPMG executive.

She added that "all the PAP (People's Action Party) needs to do is ask for my views of the (WP) MPs, I think they will die straight away".

Mr Singh asked Ms How what information she had that would destroy the WP MPs politically.

She said she did not have any, but that if the issue of financial governance was brought to court, they would all be "dragged through the mud" because of the way the media would report on the situation and how the truth would be "inverted".

She said she had been put in a "living grave" because her company cannot get any contracts now. "With all the political bulls***, they (WP MPs) will die," she added.

Justice Ramesh told Ms How to watch her language and she apologised, saying she got carried away.

Mr Singh asked Ms How what she meant when she said in the phone conversation that the "town council was going to die" if Ms Lim was the chairman.

She replied that it was because of Ms Lim's inexperience and the town council would similarly suffer if it had been any of the other new WP MPs who had taken over.

She further added on Monday that they were in a political situation and a new MP like Ms Lim would not have been able to handle a situation in which all the government bodies were coming at AHTC.

Things were political from the start, with the audits and the incumbent computer vendor withdrawing a Town Council Management System in 2011, she said.