The message on AirAsia Food's Web-based ordering platform, saying that the SIngapore address was outside the service’s coverage area.

When The Straits Times tried to place an order on its Web-based ordering platform by inputting a Singapore address, a message appeared saying that the address was outside the service's coverage area.

The message then asked users to "check (the service) out" at several Malaysian locations, such as Sri Petaling in Kuala Lumpur and George Town in Penang.

This happened during ST's attempts to order food on the platform over 12 consecutive days, from Dec 20 to 31, 2022.

A successful order could not be placed and AirAsia did not answer ST's queries.

The food delivery function is not found on the AirAsia app, which allows users to book flights and hotels, as well as send parcels and earn points.

AirAsia Food was launched in Singapore in March 2021 and delivered food from about 80 eateries, including Swee Choon Tim Sum Restaurant and No Signboard Seafood.

It charged eateries a commission of 15 per cent, which was lower than that charged by the three major food delivery operators — GrabFood, FoodPanda and Deliveroo.

The food delivery business was part of the company's foray into digital services. AirAsia moved to diversify its business after the company was hit by the Covid-19 pandemic, which grounded the bulk of its airplane fleet.

Read Also
No maps, no problem: AirAsia launches no-frills food delivery service in Singapore with 80 restaurants on board 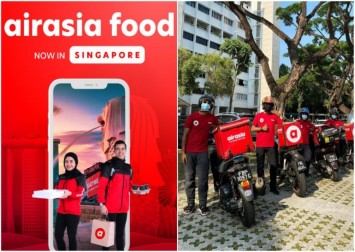 Experts said new entrants like AirAsia to the food delivery business here would find it difficult to gain a foothold, given how incumbents like Grab have conquered the local market.

"It is extremely saturated and has no room for new entrants, including AirAsia."

He added that the post-pandemic market growth for food delivery has slowed significantly, as more people are returning to offices to work and ordering from such platforms less frequently.

"This makes it even harder for new entrants to survive, especially if they wish to hold a low-cost position as a differentiating factor."

Dr Seshan Ramaswami, associate professor of marketing education at Singapore Management University, said that while AirAsia Food's low commission might have helped to get more merchants on board, the food delivery service did not seem to offer a clear selling point to consumers, who are already "spoilt with many choices".

He added that most regular consumers likely have multiple food delivery apps installed and may be wary of adding to the clutter on their phones.

AirAsia's food delivery service here was off to a slow start when it received only about 100 orders daily in its first four months of operations.

But in July 2021, Mr Tony Fernandes, chief executive of AirAsia's parent company Capital A, said the performance of the food delivery platform was "exactly what we predicted".

He said then that AirAsia's priority was to improve the platform's technology infrastructure.

The resumption of air travel may have made the carrier think twice about its food delivery business, said Prof Loh.

"AirAsia will now have to channel its resources and refocus on the aviation recovery - the time window for pivoting back is narrow and, if it does not act fast, it may lose out to its air travel competitors," he said.

In September 2022, AirAsia Group said it was aiming to restore its pre-pandemic flight levels by end-2022 as it continued to reopen routes and increase capacity.

AirAsia resumed its airline operations in Singapore, at Changi Airport's Terminal 4, that month.

Mr Fernandes said at the time that the group was operating 168 flights weekly to 12 destinations across Asean member countries. These made up about 60 per cent of its pre-pandemic flights.

In November 2022, AirAsia X — the long-haul airline unit of AirAsia Group — posted a net profit of RM25.1 million (S$7.65 million) in the three months ended September, compared with a net loss of RM652.5 million in the previous quarter.

Prof Loh said the pivot to food delivery was likely a considered move at the onset of the pandemic, when it was difficult to foresee when air travel would resume.

"But, as the pandemic situation is extremely dynamic, no business direction can be set in stone," he added.

However, this may not always succeed, he added.

"What is more important is that they react quickly and decisively, and remain resilient," he said.