Ong Lin Jie, who was a platoon trainer with the Armour Unit Training Centre, had testified during the trial last June that he did not expect the Bionix infantry fighting vehicle to move backwards.

SINGAPORE - A Singapore Armed Forces (SAF) captain who was involved in an incident where a Bionix infantry fighting vehicle reversed and mounted a Land Rover, killing the driver, was on Thursday (Feb 24) sentenced to five months' jail.

Before handing down the sentence on Thursday, Judge Kaur noted that Ong’s motivation on the day of the tragedy was to reposition the vehicle. "This does not justify the rash decision," the judge said.

The tragedy took place during an exercise by the 42nd Battalion Singapore Armoured Regiment on Nov 3, 2018.

The SAF captain, who was then a platoon trainer with the Armour Unit Training Centre at the Armour Training Institute, had given the order for the Land Rover to move forward even though it was unsafe to do so and without first establishing communication with the other vehicle.

In their submissions last year, Deputy Public Prosecutors Hay Hung Chun, Zhou Yihong, Angela Ang and Benedict Chan said that the 30m safety distance rule was "one key safety tenet" taught to all commanders within the armour formation, including Ong, and would be re-emphasised during safety briefings prior to all armour exercises.

The prosecutors had also stressed that the purpose of maintaining this safety distance is to ensure that all parties have sufficient reaction time to avoid any potential collisions.

During the exercise, a Bionix with call sign BX13 had stopped just before a T-junction. The Land Rover that Ong and CFC Liu were in stopped about 30m behind it.

During an earlier court proceeding, the prosecutors said that Ong did not know why BX13 had stopped and ordered CFC Liu to overtake it on its left.

The DPPs said: "Prior to giving this order, (Ong) did not establish any communications with BX13. Liu Kai drove the Land Rover forward, thereby bringing it less than 30m away from BX13.

At this point, the Land Rover was about 16m to 18m behind BX13, which started to reverse as part of the combat drill. It mounted the driver side of the Land Rover, pinning CFC Liu in his seat.

Ong had testified during the trial last June that he did not expect BX13 to move backwards. He has since been suspended from service.

DPP Hay had urged the court on Thursday to sentence Ong to nine months' jail, stressing that the SAF officer was supposed to uphold the tenets of safety but had breached them instead.

Defence lawyer R. Thrumurgan from Trident Law, however, asked the court to sentence his client to three months' jail. 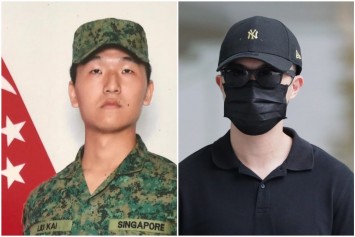 He told Judge Kaur that the decisions Ong had made on the day of the incident had also placed his own person at risk.

After the sentencing, the court heard that the offender will be appealing against the judge's decisions and his bail was set at $15,000.

In a statement following Ong's conviction last November, the Ministry of Defence said: "The (SAF) has reminded commanders that they are held accountable for the safety of personnel under their charge and must adhere to training safety regulations.

"Those who are negligent or breach training safety regulations may face prosecution under the law or the SAF's disciplinary framework."

For causing death by committing a rash act, an offender can be jailed for up to five years and fined.