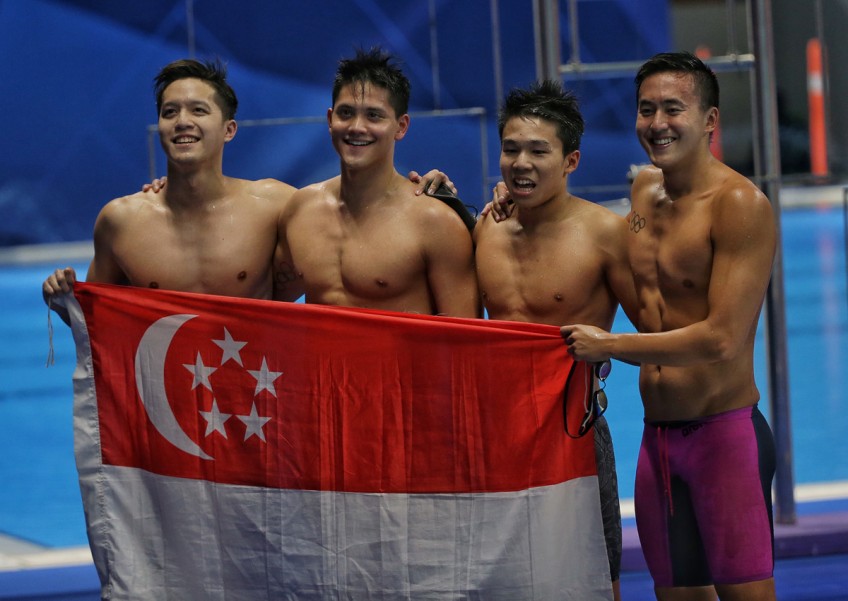 JAKARTA - He was racing for Singapore's first medal at these Asian Games, and being hunted down by South Korea's Lee Ho-joon in the final leg of the men's 4x200m freestyle relay amid a cacophony from a raucous crowd on Monday (Aug 20).

But 16-year-old Jonathan Tan kept his head down, fixed his gaze on the wall of the pool at the Gelora Bung Karno Aquatic Centre and held his nerve to pull off his biggest swim under the greatest pressure he had ever experienced.

In doing so, he helped deliver the bronze, and in a national record of 7min 14.15sec to boot. The team comprising Jonathan, Danny Yeo, Quah Zheng Wen and Joseph Schooling shaved almost four seconds off the previous national record of 7:18.14 set by Schooling, Quah, Yeo and Pang Sheng Jun at the 2015 Singapore SEA Games.

Jonathan, the youngest in the quartet, told The Straits Times that he relished the challenge of being the anchor swimmer.

"Pressure helps me a bit and it gives me that last bit of energy on my last lap," said the Anglo-Chinese School (Independent) student, who was urged by Schooling and Quah to "Go! Go!" as he sought to cling on.

"On my last turn, when I breathed, I saw (Lee) a little bit there but I just followed what my coach said - he told me not to look at any swimmer and I just put my head down and faced the wall."

Fellow Asiad debutant Quah had led off and put Singapore in third, with Olympic champion Schooling putting in a fine shift to pull the Republic up to second by the end of the second leg. Veteran Yeo then took over with Singapore falling back to third before handing the reins to Jonathan .

Jonathan had joined the National Training Centre (NTC) at age 13 only three years ago. But his team-mates and NTC head coach Gary Tan had full faith in him.

Said Schooling: "Jon has a great fighting spirit so we weren't concerned with him going last and having some pressure on him.

"We know he likes that and he can deal with it. So all we try to do is hype him up and bring him home, which he did very well."

Tan, 36, added: "We always wanted to make sure that we kept a fighter as the last leg and Jonny has that kind of tenacity.

"With youth on his side and hunger, it gives a very different element and he wants to really finish strong... it's a risk but because of his character, I know he's not going to back down."

After touching the wall, Jonathan's first instinct was to turn around to check Singapore's time and position on the screen.

But what he saw instead were his team-mates high-fiving, and so he high-fived them as well.

"I was just beyond happy and I couldn't believe it... it's my first Games and I didn't know what to expect, but my team had my back and, right before I jumped in, they were still shouting at me and spurring me on," said Jonathan, whose split time of 1:49.95 was better than his 200m free personal best of 1:50.66.

"I just have to thank them for it because it took the stress off."

Another teen who shone was 18-year-old Japanese Rikako Ikee, who managed to overhaul China's Zhu Menghui and claim the women's 100m freestyle gold in 53.27sec, just minutes after the victory ceremony for her 50m butterfly win.

It was the second consecutive 4x200m bronze medal for Singapore. At the 2014 Games, they were upgraded from fourth after South Korea, who finished third, were disqualified because Park Tae-hwan tested positive for a banned drug.

The 4x200m freestyle mark was Singapore's fourth national record of the swimming competition and the second of the day.

He is also 16 and was also an anchor swimmer yesterday, albeit in the 4x200m freestyle heats with Jonathan, Yeo and Darren Chua. They clocked 7:25.62.

Said Glen, an Asiad debutant: "After the 800m, I felt really bad but going into the (relay heat) I felt good, tried to pace myself and make sure the team got into the final."

One 16-year-old set the pace in the morning and another took Singapore to the medal at night.