How far would you go to protect your personal space?

An auntie in Singapore presented a moral dilemma that divided netizens when she was photographed extending a toothpick towards a child who was falling asleep on her.

The image in question was posted on r/trashy, a community on reddit with over 1.4 million members internationally, three days ago. The community describes itself as a place to share "trashy stories" and content that is "downright trashy, low-class, no-class".

The original poster, maxdilbe, confirmed that the photo was taken in an MRT in Singapore.

Adding more context in a comment, maxdilbe explained that the child, who looked to be four or five years old, was falling asleep on the lady. She shot annoyed looks to the child's guardian, who did nothing.

The lady's husband offered to switch places with her but she opted to hold a toothpick at the spot where the child's head was hitting her arm.

Seeing the toothpick, the child's guardian moved him to another seat.

The photo, captioned "Trashy lady's response to a little kid falling asleep on her arm a couple of times" was intended to shame the lady but r/trashy was on her side.

An overwhelming majority of commenters on r/trashy labelled the child's guardian as the "trashy" one instead for not stopping him from sleeping on a stranger.

Many comments sided with the lady and said that she was within her rights to protect her own personal space. 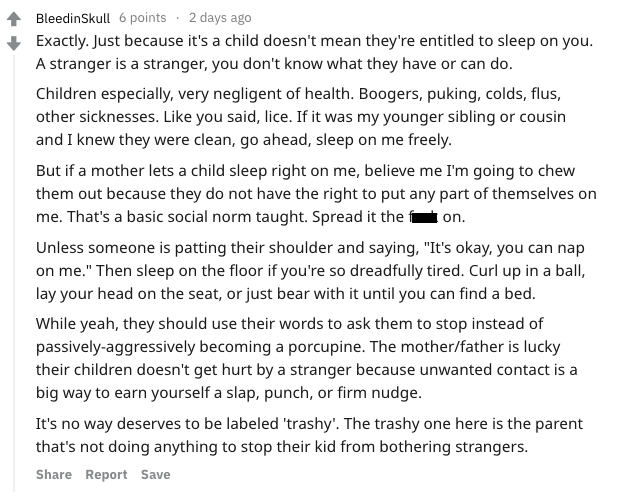 Some commenters even placed the blame on the child, labelling him as "weird" and criticising his behaviour.

This was in stark contrast to the consensus on r/singapore, a community of about 176,000 people that discusses issues relating to Singapore. Most commenters felt that the lady was in the wrong and that there was no excuse for attempting to poke a child with a toothpick.

They pointed out that there were other options such as nudging the child or speaking to the parent or guardian directly.

Some felt that she should have been more understanding of a child.

On the r/singapore thread, the rare comments in defence of the lady were downvoted.

With keyboard warriors still arguing over who's the trashiest person in this situation, the jury is still out.

Until then, let's remember - don't fall asleep on strangers in the MRT. But please, don't point sharp objects like toothpicks at sleepy children either.

#Public Transport #Social media #In Case You Missed It