Time and tide wait for no one, and neither does the baby.

Just after a woman hit send on a work email, her water broke. The 35-year-old civil servant, who had been working from home, ambled to the toilet to discover her unborn child's head had partially emerged.

"We were shocked," her husband, 38, told Lianhe Wanbao about the unusual birth of their second child on Monday (April 12).

Earlier that morning, she had felt contractions, but decided to remain in their Fernvale Close apartment to monitor the situation. As the birth of their first child lasted around seven hours, the pair thought it was too soon to head to the hospital. In the meantime, the woman continued to work at home.

However, after her surprise discovery at the toilet — two hours after her contractions began — they realised the baby couldn't wait any longer. He called the Singapore Civil Defence Force's medical emergency for help, and grabbed a pile of towels and a bucket of water to help with the delivery.

"A paramedic told me over the phone to lay my wife down on the toilet floor and to support the baby's head with both hands while she pushed," he recounted. "Fortunately for us, the delivery was really smooth. The baby was delivered within four minutes."

Though he was extremely scared, he said calm washed over him the moment he saw the baby's head, and all he could think about was to safely deliver the infant. 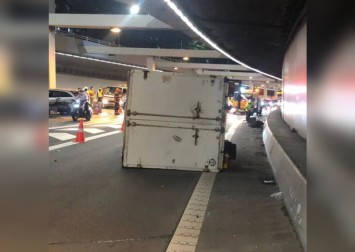 Paramedics arrived soon after to cut the umbilical cord, and brought both mother and child to KK's Women and Children's Hospital.

The proud father said watching the doctor and nurses deliver their first child two years ago allowed him to learn on the spot.

"Thankfully he took care of everything, if not I wouldn't know how to handle [childbirth] alone," his wife gushed.

The infant's birth certificate states their home as the birth address, and he can't wait to tell his son: "Your dad brought you into this world!"

It's not uncommon for expectant mothers to go into labour before they can make it to a hospital. Should you find yourself in an emergency birth, here's how to ensure safe delivery at home.

Dial 995 as soon as you can, then remove any obstructive garments and lie down or sit propped up. Try to put off the urge the push by practising deep breathing until the urge becomes too overwhelming. When that happens, push in counts of five until the baby emerges.

Once out, place the infant skin-to-skin with the mother, with the baby's body slightly raised above the head to facilitate draining the mucus. The placenta will come out spontaneously between five and 30 minutes.

Once the placenta has been delivered, it's safe to make your way to the hospital by ambulance.