The baby was found at the bottom of Block 534 Bedok North Street 3 on Tuesday morning (Jan 7).

SINGAPORE - Police are searching for the parents of a baby boy who was found alive in a rubbish chute at Block 534 Bedok North Street 3 on Tuesday (Jan 7) morning.

Apart from making their rounds on every floor of the block, the authorities are also contacting owners of vehicles parked at the open-air carpark near the block to ask for footage captured by their in-car cameras.

One such driver, Mr Ng Kok Khim, told The Straits Times: “I received a call from the police asking if they can access the footage from my in-car camera. The officer said it was to assist in the investigations of a case but he didn’t give any details of the case. At first, I thought maybe someone hit my car.”

Mr Ng said he parked his car at the block at 8am on Tuesday and headed to the market opposite where he runs a retail shop.

The baby boy was found in a bin at the bottom of a rubbish chute at the block.

His condition is stable, and there were no visible injuries, said the police.

The child was in a blood-stained tied plastic bag and discovered among other bags of rubbish and food packaging when cleaners tried to clear the bin between 8am and 9am. The baby appeared to be a newborn.

Mr Patwari Shamin, 24, a town council cleaner, told reporters that he was taking out rubbish from the chute bin when he and his colleague found the crying baby in a bag with blood in it. He then informed the Aljunied-Hougang Town Council (AHTC). 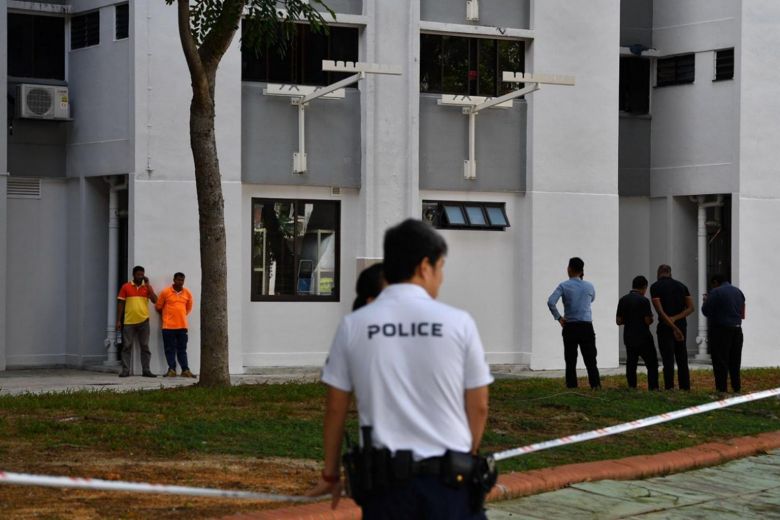 A passer-by, Mr Lim Yok Liang, 72, who was heading to a nearby coffee shop for breakfast at 9.20am, told ST: "I saw an ambulance at the open-air carpark under the block. There was a policeman carrying a baby, wrapped in a cloth.

"The baby was not crying. It looked like it was still breathing."

The infant was later taken away by ambulance to KK Women's and Children's Hospital.

The police have since been seen making their rounds on every floor of the block. One officer was seen inside a unit on the 12th floor. An elderly woman was in the kitchen.

The police told The Straits Times that they received a call for help at the HDB block at 9.11am. Paramedics attended to the baby before it was taken to hospital.

Workers' Party secretary-general Pritam Singh, one of the MPs for Aljunied GRC where the block is located, said that "a million thoughts" passed through his head when he saw the pictures of the baby left in the bin.

"Had the worker not found the blessed child, he/she could have been crushed by the compactor where all rubbish is centrally disposed in the precinct. Thankful to the Singapore Police Force and staff at the AHTC Kaki Bukit office for their assistance over this incident today. And a prayer for everyone distressed by this painful news," he wrote in a Facebook post.

Expectant mothers have the following avenues to seek help:

#babies #HDB #In Case You Missed It #child abuse