Baby taken to hospital after fire involving ebike at Geylang

An infant was rushed to hospital yesterday after a fire involving an electric bicycle broke out at the ground floor of a two-storey shophouse in Geylang.

A spokesman for the Singapore Civil Defence Force (SCDF) told The New Paper that they responded to the fire at 527 Geylang Road at 7.20am yesterday.

She said: "The fire involved a power-assisted bicycle and was extinguished by SCDF using one hose reel jet.

"As a result of the fire, one infant was taken to KK Women's and Children's Hospital."

TNP understands the child suffered from smoke inhalation and had been on the upper floor of the shophouse when the incident happened.

According to Chinese evening daily Shin Min Daily News, there were at least seven people living on the upper floor.

One of them, who did not want to be identified, told Shin Min they were asleep when the fire started.

He said: "I sniffed something and woke up. That's when I saw smoke coming from downstairs and was shocked."

He quickly woke the others up and they contacted the SCDF. 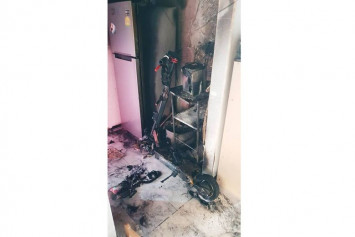 When TNP went to the scene yesterday, the shop was filled with damaged electronics items covered in soot. Fridges and vending machines were also seen outside the shop.

A man in his 50s who claimed to be the business owner entered the premises at about 3.30pm.

Declining to be named, he said the fire was caused by an electric bicycle, pointing at one that was badly damaged in the middle of the shop.

Shin Min reported that the store dealt in second-hand electronics and it had yet to open for business as it was still under renovation.

The electric bicycle is believed to have been in the store's pantry area when the fire broke out.