Singapore shuttler Loh Kean Yew plays against Denmark's world No. 1 Viktor Axelsen in the first round of the BWF World Championships.

SINGAPORE - National shuttler Loh Kean Yew has slain the biggest giant in the badminton world as he beat Denmark's world No. 1 and Olympic champion Viktor Axelsen 14-21, 21-9, 21-6 in the first round of the Badminton World Federation World Championships in 54 minutes on Monday (Dec 13).

The Singaporean world No. 22 got off to a poor start in Huelva, Spain, going down 5-0 in the first game and while he fought back to 11-10, his opponent - the 2017 world champion - used his 1.94-metre frame to impose better court coverage and take down the opening frame.

However, Loh roared back after that with aggressive play, superb reading and pin-point finishing to record his first win over Axelsen in five attempts and inflict on the Dane only his fourth defeat in 65 matches this year.

“It has been a hectic end to the season for all of us. Viktor is a superb player and he will come back even stronger, while I need to recover well and stay focused to try and go as far as I can.”

The 24-year-old will meet Austria's world No. 93 Luka Wraber in the second round on Wednesday.

A gracious Axelsen said: "I lost to a better player. Nothing really came together for me. I tried to do my best and step up but today wasn't it.

"It was a bad day at the office. Not many things went my way and a lot of things went Loh's way and he fully deserves the win today. I don't want to stand here and cry about what I could have done differently. Loh won the game and I didn't deserve it." 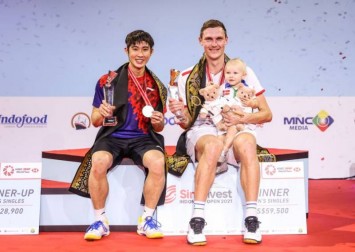 National singles coach Kelvin Ho added: "The game plan was for Kean Yew to keep taking the initiative while being calm and patient, and he was mentally strong today."

It has been a strong end to 2021 for Loh, who surged 21 places in eight weeks to crack the top 20 before settling in his current position.

Besides capturing the Dutch Open and Hylo Open titles in the past two months, he also claimed the scalps of Japan's then-world No. 1 Kento Momota (Indonesia Open), Malaysia's world No. 7 and All England champion Lee Zii Jia (French Open) and Chinese Taipei's world No. 4 Chou Tien-chen (Hylo Open).

Meanwhile, after receiving a first-round bye, compatriot and women's world No. 16 Yeo Jia Min will play Scotland's world No. 21 Kirsty Gilmour in the second round of the BWF World Championships on Tuesday.

The winner of this match is projected to meet world No. 1 Tai Tzu-ying in the next round, if the Taiwanese beats Russia's world No. 27 Evgeniya Kosetskaya.