'Ban PMDs from footpaths so we can feel safe again': Accident victims and pedestrians

She had no idea what hit her on a walking path, but she knows she has to live with the consequences for the rest of her life.

Madam Tan Peck Lay, 58, broke her right wrist after e-scooter rider Tan Gim Moh, who was holding a cigarette in one hand, knocked into her from behind in Yishun last year.

The part-time sales executive, who found out what happened later from witnesses, paid about $1,000 for medical costs and physiotherapy, for which she was not compensated.

For the next three months, Madam Tan, who lives alone, was unable to bathe herself or do housework as her injured wrist was in a cast.

More far-reaching, her encounter with Tan, 61, who was jailed for 18 days, left such a mark that she has given up her cycling hobby and evening walks.

"You get a phobia, honestly. You are scared to fall again. It is no joke," Madam Tan told The New Paper.

"These errant e-scooter riders, they don't even know how much trouble and inconvenience they cause people."

Still, Madam Tan can consider herself lucky to be able to talk about her traumatic experience.

Cyclist Ong Bee Eng, 65, fell into a coma and died last week after colliding with a speeding, non-compliant e-scooter in Bedok. She is believed to be the first fatality from a collision involving a personal mobility device (PMD) on a public path.

Her death has since reignited calls for a ban on PMDs.

More than 65,000 people have signed a Change.org petition, one of several petitions circulating on social media.

This is more than triple the number of signatories before news broke of Madam Ong's death, a response Mr Zachary Tan did not expect.

Mr Tan, who started the petition six months ago, told TNP: "Many people, including me, are now walking on the streets in fear for ourselves and our loved ones, a psychological burden wrongfully imposed on us.

Mr Tan, who declined to give his occupation, added: "I hope the support will lead to a ban, so no more accidents will occur."

If a blanket ban appears unlikely, others like Madam Tan will settle for banning them from footpaths, so pedestrians and cyclists can use them without fear of serious injury.

She said: "PMDs should be banned from using pavements or walking paths because they are very dangerous."

Mr Kok Wei Ming, 35, a social media manager who signed the petition, said that walking on footpaths nowadays is worse than crossing the road.

"With traffic lights, at least cars and motorcycles will stop. PMD riders do not," he said.

He called for an interim ban on PMDs from footpaths until a proper safety framework can be set up.

In the meantime, PMDs should be used on the roads with rules on helmet use and speed limits, he added. 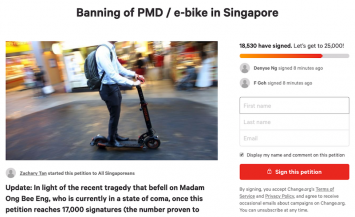 Mr Nicholas Cho, 41, said he gave up his PMD after a hit-and-run accident last year left his 68-year-old aunt bleeding from the head and unconscious.

"The person had no decency to even stop and help... It is disgusting," the marketing director of local fashion brand Flesh Imp, who also signed the petition, told TNP.

"I am a PMD user. There is no denying it's a good mode of transport in a city where cars are very expensive. The problem is I don't know how they can co-exist with pedestrians."

Last Friday, the Active Mobility Advisory Panel gave new recommendations for safe PMD use, including a minimum age of 16, a theory test requirement and mandating that businesses buy third-party liability insurance for their riders.

But Mr Cho felt the rules were being made only after a spate of accidents and fires.

"It is not a very Singaporean way of doing things," he said.

"Maybe people will say a ban is very dramatic. But unless we have the proper infrastructure and people who are old enough to not mess things up... ban it first, come up with a full set of rules, get all the feedback, then you say, all right, here you go."

She was waiting at a bus stop when she was hit by a food delivery rider, who did not stop.

The technician said: "She got away with no cuts or bruises. But it traumatised her quite a bit and she was really worried until we went to do an ultrasound.

"My wife getting hit and the fear of miscarriage was a whole new level of fear, as two lives are involved."

While he did not agree to a full PMD ban, Mr Teo said there must be strict laws and specific areas where they can be used.

"Until such facilities are developed, the best thing to do is prohibit such dangerous devices."