Biometrics screening to be introduced at all checkpoints from next April: ICA

SINGAPORE - A biometrics screening system to identify travellers through fingerprint, facial and iris scans is expected to be introduced progressively at all checkpoints from next April.

The Immigration and Checkpoints Authority announced the move on Monday (Nov 12), saying it aims to build a robust biometrics database of travellers that could be used in the event of a security incident, and screen incoming and outgoing travellers more efficiently and accurately.

The BioScreen-Multi Modal Biometric Screening System (MMBS) has been trialled in stages at immigration counters in the Woodlands and Tuas checkpoints and the Tanah Merah Ferry Terminal, with the fingerprint scans in place since April 2016.

The facial and iris scans were trialled from July 2018, complementing the fingerprint system for immigration clearance.

These new scans are especially useful for travellers who cannot be identified easily through their fingerprints, such as when they have scars on their fingers or have naturally wet or dry fingers, the ICA said.

The initiative was showcased by the ICA during a media event at Woodlands Checkpoint along with facial recognition technology that has been in place at the checkpoint since 2012. This will also be introduced at other checkpoints. 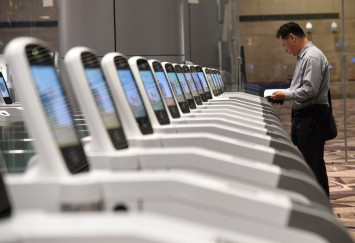 Under this system, called the Automated Biometrics and Behavioural Screening Suite, cameras detect people of interest - based on a watch list compiled by various agencies - and automatically highlight them to officers at a command centre.

This technology has already helped to detect foreigners wanted for offences such as overstaying.

"More than 280,000 travellers pass through Woodlands Checkpoint every day, and with this new facial recognition technology, we will be able to process large volumes of passengers more efficiently and securely," said Deputy Assistant Commissioner Lian Lee Siong, who is second deputy director of ICA's operations division.

"This would help to ensure security and keep out people on the watch list, particularly during high key events like the ASEAN Summit."