SINGAPORE - An Australian man has been charged over his alleged involvement in an incident at a condominium in Spottiswoode Park Road in which a 73-year-old man died after he was struck by a glass bottle.

Andrew Gosling, who appeared in court on Friday (Aug 30), was charged with one count of causing death by performing a rash act.

On Aug 18, Mr Nasiari Sunee, a delivery driver, was at a housewarming party of a relative at the Spottiswoode 18 condominium's barbecue pit area when a bottle hit him just as he was about to eat.

The oldest of his four children, service manager Nas Suriati Nasiari, 44, told The Straits Times that relatives suddenly heard two thuds before her father collapsed on the ground with a head wound.

They then spotted an intact glass bottle nearby.

A relative, who is a nurse, tended to Mr Nasiari before he was taken by ambulance to the Singapore General Hospital about 8.35pm.

Madam Nas Suriati said that his heart stopped thrice during treatment and the family decided not to resuscitate him if it stopped a fourth time.

"We didn't want to prolong the pain," she said. 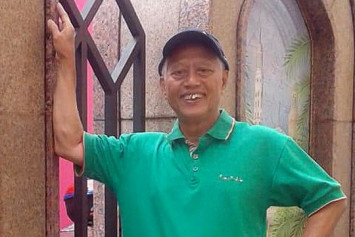 Mr Nasiari's blood pressure plunged the next morning and he died around 9am.

The grandfather of nine was buried on Aug 20.

Following the incident, police went door to door at Spottiswoode 18 to look for the person responsible for causing the bottle to fall from the 35-storey building.

Residents told The Straits Times that officers showed them a picture of an Italian wine bottle.

They were also asked if they had been drinking wine and were willing to provide fingerprint samples.

If convicted of the offence, Gosling can be jailed for up to five years and fined.

He will be back in court next Tuesday.