It's the start of another school year and doing school runs at the crack of dawn while bleary-eyed is no fun, we get it.

A dashcam footage recently uploaded online, however, serves to warn us of the importance of keeping vigilant while on the road. And not just when it comes to pedestrians and oncoming traffic.

In the 43-second clip, a boy is seen tumbling out of the car at his school's drop-off point after the driver suddenly moves off without warning.

According to the accompanying caption, the incident happened outside the main building of Anderson Primary School on Wednesday morning (Jan 19) at 6.49am.

In the video, the car arrives at the porch and the back door of the Volkswagen swings open as a child is seen preparing to get off. But before he is able to exit the car fully, the vehicle moves off, causing the boy to tumble onto the road. The car then immediately comes to a stop.

The boy appears slightly dazed but unhurt as he manages to quickly pick himself off the ground. He has a quick exchange with the driver for a few seconds before a road safety volunteer hurries over and closes the car door.

The video uploaded on Roads.sg has since gathered more than 59,000 views and close to 200 comments, some of whom quipped that the clip gave new meaning to "dropping your kid off at school".

While it is not certain if the driver is the boy's parent, viewers were quick to condemn the driver for their carelessness. 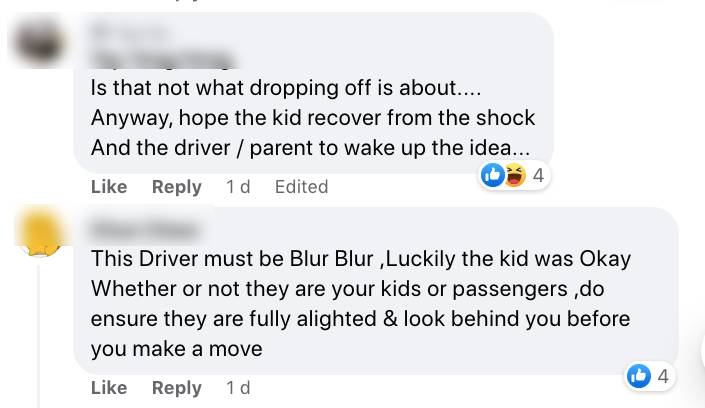 But commenters were equally aggrieved that the driver didn't seem concerned enough to get out of the car and check if the boy was alright.

While thankfully the child was unharmed in this incident, the outcome of carelessness while on the road can be more serious.

In 2019, a Singaporean boy was left stranded at a rest stop on Malaysia's North-South highway after his parents forgot to check if he was in the car before leaving. Similarly, a young Chinese boy was also left behind at a petrol station after his parents accidentally drove off without him.

Elsewhere around the world, there have also been cases of parents absent-mindedly leaving their children in parked cars, to deadly consequences.